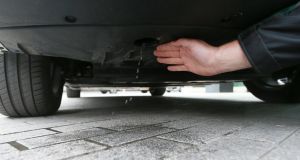 Hydrogen-fuelled cars, buses and trucks can be a reality in Ireland by 2023, and there is the potential for more than 35,000 hydrogen vehicles to be on roads within a decade, a strategic review has found.

These are among the findings of a report into hydrogen’s potential in helping to address Ireland’s greenhouse gas emissions arising from transport. With State supports it would remove some 300,000 tonnes of CO2 every year, it concludes.

The research by Element Energy was commissioned by a cross-industry group – Hydrogen Mobility Ireland – which includes major transport, energy and utility companies. It provides the Government with a potential road map up to 2030, including roll-out of infrastructure on an all-Ireland basis.

Transport accounts for about 20 per cent of Ireland’s greenhouse gases, and is the largest source of energy-related emissions.

Hydrogen is a low-carbon fuel and will be produced locally in Ireland. Fuel cell vehicles consume hydrogen as a fuel to produce electrical power for the vehicle, with water vapour the only by-product. The ability of electrolyser technology to also convert excess electricity generated by wind or solar farms not taken on to the grid is set to be a new green source of hydrogen.

Fuel cell vehicles complement battery electric vehicles as they offer greater range and faster refuelling (less than three minutes), and are particularly suitable for heavy passenger and goods vehicles. Hydrogen vehicles, the report finds, will be cost-competitive with conventional fuel vehicles by 2025; buses, vans and taxis could be deployed as the catalyst for market establishment, followed by HGVs and trains.

Recommendations include:
– The Government apply similar incentives to hydrogen fuel cell vehicles as battery EVs;
– Locating clusters of refuelling stations to give early adopters confidence; initially near the M50 and in Dublin city centre.
– A first deployment involving two hydrogen production sources and three refuelling stations can be completed for €34 million, with €14 million of State funding;

– A total cumulative investment of €350 million by 2030 by the entire industry with supporting Government investment of €14 million in the initial phase and a further €87 million to €270 million in the second phase, depending on vehicle uptake. That would be a minimum of €101 million and a maximum of €284 million overall of State investment ‑ which is less than battery EV subsidies over the past decade

By 2030 a network of 76 stations would ensure 50 per cent of the population of the island would live in a town with a hydrogen refuelling station as well as providing adequate coverage of major roads. A network of 27 electrolysers beside renewable generators (mostly wind farms) would supply the fuel.

Speaking at its launch in Dublin, Minister for the Environment Richard Bruton said the research was “a valuable insight into a potential pathway for the introduction of hydrogen vehicles in Ireland between now and 2030”. He noted Ireland’s ability to produce hydrogen and the fuel’s suitability for HGVs in particular.

Mark Teevan, chairman of Hydrogen Mobility Ireland and corporate affairs director at Toyota Ireland, said: “We see hydrogen fuel cell vehicles as having a very big role to play in a full decarbonisation of transport. The challenge is to get started, since not only is a new infrastructure needed but also the production of a new fuel.”

Some Hydrogen Mobility Ireland members are already planning on initiating hydrogen production in Ireland, including Indaver at its waste-to-energy plant in Co Meath. Its chairman, John Ahern, said: “Installing an electrolyser to produce hydrogen will allow us to make use of the energy that would otherwise be wasted at times when we are asked to power down by the grid operator. This typically happens on windy days when there is more supply than demand for electricity.”

Dr James Carton of DCU and Hydrogen Mobility Ireland underlined hydrogen’s broader potential: “We see hydrogen playing a role in achieving Ireland’s climate targets in transport, heating, energy and storage. Our aim is to connect hydrogen with all sectors of energy and society, creating a new clean, zero-emission economy.”

1 Majority of employees don’t want to return to pre-Covid working patterns
2 Dublin banker sells island off Cork for €5.5m
3 Almost 600 social and affordable houses given green light in Dublin
4 The $6bn judgment pitting Nigeria against Irish businessmen
5 Homeworking is depriving me of juicy gossip
6 If tourists are such pariahs should we not be testing them on arrival?
7 Considerable private investment in social housing sector expected
8 ‘My rent here is so low it’s a joke’
9 Tobacco giant’s menthol-ban substitutes take 5% share of Irish market
10 Primark rejects £30m bonus for bringing back staff
Real news has value SUBSCRIBE