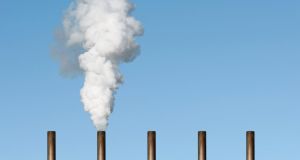 The Environmental Indicators Ireland 2020 report found air quality had deteriorated in relation to a range of pollutants. Photograph: iStock

Ireland has “performed poorly” in the reduction of emissions in the last 20 years compared with other EU states according to the Central Statistics Office (CSO) with the third highest greenhouse gases emissions per capita.

The Environmental Indicators Ireland 2020 report found air quality had deteriorated in relation to a range of pollutants. However, improvements had been made in relation to water quality and the generation of waste.

In 2018, Ireland’s greenhouse gas emissions amounted to the equivalent of 60.9 million tonnes of carbon dioxide, just under 10 per cent higher than the 1990 figure of 55.5 million tonnes.

In relation to a number of specific pollutants, Ireland performed particularly poorly.

In 2017, four EU Member States were above their 2010 National Emissions Ceiling for nitrogen oxides. Ireland had the worst level of emissions, at 70 per cent above its ceiling , while Bulgaria had the best at 58 per cent below its ceiling.

Ireland was also worst for a collection of compounds, mainly emitted from transportation, industrial processes and use of organic solvents, called NMVOCs (Non-Methane Volatile Organic Compounds).

Ireland has however, made significant strides in improving water quality. In 2019, almost 90 per cent of bathing water sites in Ireland were classified as being of good water quality.

Almost one third of urban sewage received “secondary treatment” reducing its “nutrients” or pollutants, compared with only 4 per cent in 1997. However, the proportion of unpolluted river water in Ireland fell from an annual average of 77.3 per cent in 1987 -1990 to 66.2 per cent in 2016 -2018.

The recovery rate for packaging waste in Ireland improved significantly from 23 per cent in 2001 to 91 per cent in 2015. Although again it slipped in 2017 to 86 per cent.