Cool, sunny and breezy temperatures forecast for the weekend 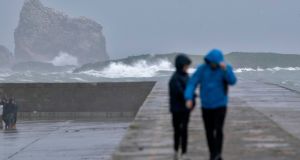 About 8,000 homes, farms and businesses remained without power on Friday night following the impact of Storm Ellen this week, including 2,500 customers who suffered outages on Friday, ESB Networks has said.

While power has been restored to 190,000 customers whose properties were affected by the stormy conditions, primarily in the south, west and midlands, ESB said crews would continue working until nightfall to reconnect the thousands of people still without power.

Most of those still affected by the outages are based in east Cork, Tipperary, east Limerick, east Galway and Leitrim, said the network. Weather conditions on Friday, which included lightening in some places, and which were unrelated to Storm Ellen resulted in additional power outages on Friday, said the ESB.

It cautioned that a “small pocket of customers” may be without power beyond Saturday and advised customers to check the latest information on the PowerCheck App.

It also issued a public safety message for members of the public not to approach fallen trees, wires or damaged electricity wires.

“We are acutely aware of the significant strain that these outages have placed on the family and commercial lives of those who remain without power and apologise for the disruption caused,” said a statement from ESB.

Weather conditions improved on Friday, with sunny spells and warm temperatures, but remain challenging after Storm Ellen left a trail of destruction across the country including fallen trees and flooding.

Met Éireann issued a marine small craft warning for southwest winds reaching force 6 or 7 on Friday evening over all Irish coasts but there were no further general wind or rain weather warnings.

Friday evening is due to be clear with some scattered showers and longer spells of rain across the west and northwest into the early hours of Saturday morning.

Saturday is set to be cool and breezy with outbreaks of rain in the west, including some heavy bursts, which will spread eastwards during the morning and early afternoon. The afternoon will become sunny with maximum temperatures of 16 to 19 degrees and fresh, gusty winds near western and southern coasts.

Conditions will be similar on Sunday and Monday with a mix of sunshine and rain and temperatures ranging between 15 to 19 degrees Celsius expected over the coming days.

Winds in Co Cork reached almost 145km/h at the mouth of Cork harbour during the storm, bringing down trees and power lines across Munster. Major routes were cleared following the worst of the weather, but motorists were urged to continue exercise extreme caution and be alert for fallen trees and spot flooding.

Roads remained wet on Friday morning in most places while the Rosscarbery/Glandore road was still closed by evening due to flooding earlier in the week, said AA Roadwatch.