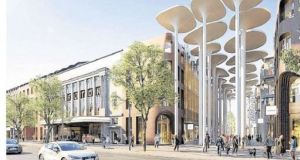 A computer-generated image of the proposed O’Connell Street redevelopment

The redevelopment of Dublin’s Moore Street and Upper O’Connell Street is finally to get under way following the appointment of architects to design a new “city quarter” for the old “Carlton site”.

UK property group Hammerson has appointed three Irish firms to join London-based Acme Architects to prepare the planning application for the six-acre site, parts of which have lain vacant and derelict for more than 40 years.

Hammerson last year decided to scrap the existing 2010 planning permission for a €1.25 billion enclosed shopping complex on the site which stretches from O’Connell Street and Moore Street, to Henry Street and Parnell Street.

Instead it plans to seek permission for an “open” scheme which will see the historic street pattern restored, the development of a new east-west pedestrian street between O’Connell Street and Moore Street, two new civic squares, shops, offices, apartments, a hotel and an underground metro station.

It also proposes a “historical trail” to commemorate 1916 Rising events and locations through the site. Two years ago, the Court of Appeal overturned a declaration that buildings on and around Moore Street, part of the Hammerson site, constituted a national monument following a case taken by the State.

State-owned buildings at 14-17 Moore Street remain national monuments and are due to be developed separately as a 1916 Rising Commemorative Centre.

Speculation has recently mounted that Hammerson was preparing to offload the project, following reports it was to sell a number of its UK shopping centres to raise cash to ride out the coronavirus pandemic.

However, a spokesman said it was focusing on developing its “city quarter” schemes, of which the “Dublin Central” project was a flagship example. Unlike older-style shopping centres, these developments were open and street-based, making them more suitable to a post-pandemic environment, he said.

Irish architects Grafton, RKD and MOLA will work to develop the concept designs produced last year by Friedrich Ludewig of Acme, with a view to submitting a planning application early next year.

The concept designs included the use of a canopy of tall lily-pad-like structures to shelter the new pedestrian street, leading from O’Connell Street, from the elements. The structures funnel rain internally, while maintaining an open feel to the street.

The site was for years known as the Carlton site as originally it just encompassed the old Carlton cinema, the plot beside it that had been vacant since 1979, and some backlands between O’Connell Street and Moore Street.

As part of the new scheme, the facade of the old cinema will be restored, though it will be used for retail and the cinema relocated to the northwestern part of the site, behind Conway’s pub on Parnell Street. Three protected structures, 42 O’Connell Street – the last remaining Georgian house on the street, O’Connell Hall at the back of No 42, and Conway’s pub, will be restored in full.

Hammerson has said it wants to “restore the unique character and vibrancy” of the Moore Street markets and will “respect and enhance street market trading” in consultation with the stall holders and Dublin City Council.