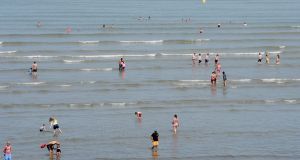 Three Wexford beaches have had “do not swim” notices erected after the local council reported high levels of bacteria in the bathing water.

Wexford County Council erected the notices at Ballymoney North, which has a blue flag and is an identified bathing beach; Duncannon; and Booley Bay Beach, which is a green coast beach.

Routine testing by the council’s bathing water sampling programme showed E.coli and Intestinal Enterococci in the bathing water breached the mandatory levels at the three beaches.

Following consultation with the Health Service Executive, the council issued “do not swim” warning notices at the affected beaches in the interest of public health and in accordance with the Bathing Water Quality Regulations.

Technical staff from Wexford County Council are investigating the matter, and the elevated levels of E Coli and Intestinal Enterococci may be due, in part, to recent spells of heavy rain, a spokesman for the council said.

Further water quality samples were taken on Thursday, and results are expected on Saturday August 22nd, at which stage the prohibition notices will be reviewed.

For now, beach lifeguards at Ballymoney North and Duncannon beaches will fly a red flag indicating swimming is prohibited, while signage will also be placed at Booley Bay Beach.

Members of the public are requested to abide by these restrictions until further notice.

The spokesman added that the council “wishes to assure the public that water quality results for 15 other beaches sampled along the Wexford coastline have been excellent with no issues encountered”.

Meanwhile, a temporary bathing prohibition notice has been issued for Seapoint beach in south Co Dublin.

In a statement on Thursday, Dún Laoghaire-Rathdown County Council said that the notice was being issued after test results revealed poor water quality at the beach.

The council said that the results “indicate an increase in the levels of bacteria found in the bathing water, as a result of overflows from the Irish Water wastewater network”.

The notice is in place until August 25th, with further testing set to take place.