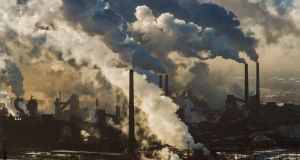 The ‘tipping point’ concept suggests ecosystems can absorb a given amount of environmental pressure before hitting a threshold. Photograph: iStock

The concept that global ecosystems can withstand a lot of environmental pressure before hitting tipping points, especially when used in relation to temperature rise driven by climate change, “is unhelpful and could have dangerous consequences”, scientists have warned.

The warning is the “big-picture message” following an evaluation by an international team of scientists of 4,600 different field experiments on climate change. The evaluation suggests using ecosystem thresholds to develop environmental policies is not the best approach.

The “tipping point” concept suggests ecosystems can absorb a given amount of environmental pressure before hitting a threshold. After they pass this tipping point, they can then change dramatically.

“The concept plays a central role in many policies tackling global environmental change. For example, a policy may exist on the basis that if warming is kept below a certain threshold, ecosystems will continue to operate in a safe space,” explained Dr Ian Donohue from Trinity College Dublin’s school of natural sciences. Dr Donohue contributed to the research, which was published in Nature Ecology & Evolution on Monday.

“If thresholds are to be useful to assess and mitigate global environmental change we should be able to pinpoint them in existing environmental data or – better still – predict them for different drivers of environmental change so that we can safeguard ecosystems going forwards. From our analyses, this is not possible in virtually all cases,” Dr Donohue said.

Prof Dr Helmut Hillebrand, a biodiversity expert at the University of Oldenburg who led the study added: “To develop environmental policies we need a general guideline, but the problem is that, on one side, thresholds might be hard to detect in natural ecosystems when the anthropogenic change hasn’t been large enough yet. On the other side, we can’t determine thresholds for each process in each ecosystem.”

Climate scientists have consistently warned of risks from abrupt and irreversible climate change – it also helps to underline the world is in a climate emergency. The UN Intergovernmental Panel on Climate Change introduced the idea of tipping points two decades ago. At that time, “large-scale discontinuities” in the climate system were considered likely only if global warming exceeded 5 degrees above pre-industrial levels.

The analyses look at consequences of present-day but also future pressures, such as increased CO2 or nutrient levels.

Dr Donohue added: “We need to abandon the idea of safe operating spaces. It gives the completely erroneous impression that small pressures do not affect ecosystems at all, and that we can continue with business-as-usual so long as we keep our damage below a certain level.”

The research demonstrates responses to even the smallest pressure can be large, he noted. “If we wait to see clear tipping points in response to any of the major human-induced environmental changes such as warming or biodiversity change, we risk overlooking the small gradual changes which sum up to a shifting baseline over time, that is a shift in the perception of what a healthy ecosystem looks like.”

The scientists believe policymakers should readdress use of thresholds in ecosystem management and instead work with more nuanced criteria to be able to act according to the precautionary principle. “The underlying message: when the stakes are so high, we shouldn’t be gambling with our environment.”