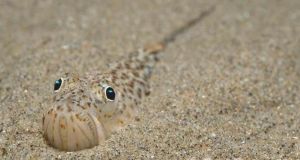 The weever fish is camouflaged in the sand, where it digs in, so that only the eyes, mouth and its venomous black dorsal fin project.

Swimmers and beach-goers are being advised to watch out for a particular type of venomous fish, which can cause a very painful sting.

In the past week there have been several reports of swimmers and people out walking along a number of Waterford beaches who have been badly stung when they step on a weever fish.

The weever fish spends most of its time buried under the sand. It is found all round the Irish coast but only in sandy areas where the water is warm, shallow and close to the mean low water tide line.

It is camouflaged in the sand, where it digs in, so that only the eyes, mouth and its venomous black dorsal fin project.

Stings from the 15cm long fish can be very painful, and lead to swelling and reddening of the foot. Stings have been known to trigger heart attacks or cause a severe allergic reaction, such as anaphylactic shock.

The sandy coloured venomous fish is very difficult to see at low tide and Lola O’Sullivan, the chairwoman of Water Safety Ireland in Waterford says there is very little people can do to avoid the weever fish except stay out of the water at low-tide.

The majority of incidents of people being stung occurred this week, with the warm weather leading to staycationers flocking to beaches along the Waterford coastline.

Ms O’Sullivan says the pain from the fish’s sting is excruciating as its spines embed into people’s feet as they discharge their poison.

“The pain is at the worst for about the first two hours. You don’t generally see the fish so you just feel this dart of pain usually that goes into the foot,” she said.

Ms O’Sullivan advised that if there is a lifeguard on the beach anyone stung should go to them as quickly as possible for treatment.

“If you’re in a lifeguarded beach, go straight to the lifeguards and they will treat you by placing the affected area in warm water and gradually heating the water as hot as the person can bear, over a 20-30 minute period.”

She added, “This increases the blood flow and assists the natural healing; the heat helps to break down the poison”. The water needs to be over 40 degrees Celsius to be of any benefit in breaking down the poison.

Ms O’Sullivan said the people can apply this treatment themselves but “it should be treated swiftly to reduce the pain.

“If the pain does not reduce after two to three hours you should attend your doctor.

“Weever fish are very common in Irish waters, there is nothing you can do to avoid them other than not going into the water when the tide is low”.