Plan for drink containers would result in loss of 1.2m kerbside collection points 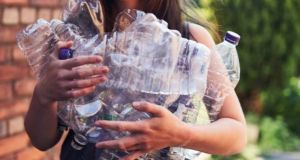 The programme for government commits to introducing a deposit-and-refund scheme for plastic bottles and aluminium cans. Photograph: Getty

Government plans to introduce a deposit-and-refund scheme (DRS) for beverage containers is likely to result in the collapse of kerbside collection for household recyclables, especially plastic bottles and cans, according to waste management companies.

Their representative body, the Irish Waste Management Association (IWMA), has called upon the Government to scrap the scheme, which it claims is not suited to Ireland, and will result in the loss of 1.2 million kerbside collection points.

“The misguided rush to introduce the scheme will result in damage to the environment in the longer term, and is counter-productive to its intended ambition of increasing recycling rates,” said association spokesman Conor Walsh.

The programme for government commits to introducing a deposit-and-refund scheme for plastic bottles and aluminium cans. The industry-funded recycling group Repak, which had campaigned against such a scheme, recently dropped its opposition to it.

Minister for Climate Action Eamon Ryan favours a scheme which levies a small charge on plastic drinks containers and cans that is refundable when returned to supermarkets, vending machines or recycling centres. It is estimated it would cost up to €116 million to set up such a system.

Mr Walsh argued that it had never been easier for consumers to recycle beverage containers. “In terms of environmental impact, placing materials in kerbside recycling bins has a lower environmental impact compared with delivering them to centralised locations.”

Mr Walsh said the global market for paper had collapsed, so the only items of value currently in the recycling bins were plastic bottles and metal cans.

“Removing these materials from the existing system is likely to result in the collapse of that system, with the loss of the 1.2 million kerbside collection points, leaving only the 2,000 centralised collection points mooted under the DRS system.”

This would make it more difficult for householders to recycle, and have a devastating impact on Ireland’s recycling rates, he said.

Figures of enhanced recycling levels quoted from other countries were misleading, according to the IWMA. “DRS is most effective in countries that do not have a well-established and comprehensive kerbside recycling system. Ireland is not one of those countries,” said Mr Walsh.

To achieve higher recycling rates, the Government should invest in infrastructure that enhances the current system of household and bottle bank collections, while local authorities should provide more on-street recycling bins.

“Recycling is most effective when it is clear, consistent and easy for the public, both at home and when on the move. We have great confidence in the public’s good intentions with regard to recycling, so we just need to make street recycling as easy as household recycling to get the best result and to meet our recycling targets,” he said.

A deposit-and-refund scheme, he predicted, would bring “many negatives for the public”, including having to pay more for beverages and having to store uncrushed containers in homes to get their deposit back.

“People will have to bring the containers to their local supermarket and place them individually into a machine that will give them store credit, rather than put them in the recycling bin at their front door.”

In addition, they will then have to pay more for their household waste collection service, the IWMA believes, as “the value of the containers will be lost to their service provider or, in the worst-case scenario, the recycling service will collapse altogether as the remaining materials cost more to recycle than to recover as fuel in waste-to-energy plants”.

Mr Walsh said the only winners in such a DRS scheme were companies providing reverse vending machines and potentially producers that put the materials on the market.

“Extra income from deposits is likely to greatly exceed the cost of returned deposits, which will result in greater profits for those that flood the market with single-use beverage containers.”