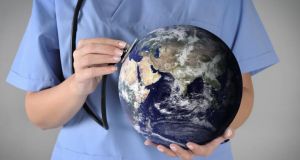 The report also warns that people in the east Mediterranean face a threat ‘markedly higher than in Africa and southeast Asia’ Photograph: iStock

Rising temperatures as a result of climate change are already exposing populations to an unacceptably high health risk, with older people in parts of Europe “particularly vulnerable to extremes of heat”, according to the Lancet medical journal.

In its latest annual “countdown” report on human health impacts from climate change, it warns that people in the east Mediterranean face a threat “markedly higher than in Africa and southeast Asia”.

Rising ambient temperatures are placing vulnerable populations at increased risks across all regions of the world, with outdoor workers, people with underlying health conditions and older people living in urban areas most at risk.

People living in some parts of Europe and the east Mediterranean are likely to be most vulnerable due to their ageing populations living in cities, it warns. More than 42 per cent of the population there are over 65 – compared to 38 per cent in Africa and 34 per cent in southeast Asia.

Heat exacerbates urban air pollution, with 97 per cent of cities in low- and middle-income countries not meeting WHO air quality guidelines, the report says. When those who are over 65 have cardiovascular diseases, diabetes, or chronic respiratory diseases are exposed to heat stress, their health can deteriorate.

Leading doctors, scientists and policy experts from 27 organisations contributed to the report. Partners in the “Lancet Countdown: Tracking Progress on Health and Climate Change” include the World Bank and the World Health Organization (WHO), among others.

With the pace of climate change outweighing the urgency of response, the report provided cause for concern, said Prof Hilary Graham of the University of York.

The authors, however, also note promising trends in key areas for health, including the phase-out of coal, the deployment of healthier, cleaner modes of transport, and health system adaptation to climate change.

“Present day changes in heat waves and labour capacity provide early warning of the compounded and overwhelming impact on public health that is expected if temperatures continue to rise,” Prof Graham added.

Lack of progress “in reducing emissions and building adaptive capacity threatens lives and health systems and must be addressed to avoid disruption to core public health infrastructure and overwhelming health services”.

Despite delays, some sectors were embarking on a low-carbon transition, which was a promising sign, she said. “It is clear that the nature and scale of the response to climate change will be the determining factor in shaping the health of nations for centuries to come.”

New health impacts of heat documented in its latest report include confirmation that 157 million more vulnerable people were subjected to a heatwave last year than in 2000 – 18 million more than in 2016 – while a total of 153 billion hours of work were lost in 2017 due to extreme heat. On average, each person was exposed to “an additional 1.4 days of heatwave” from 2000 to 2017, compared with 1986-2005.

With a prolonged heatwave affecting right across most of the northern hemisphere during the summer of 2018, there is indication this trend is continuing to worsen.

Heat stress, “an early and severe effect of climate change”, is commonplace and humans, and the health systems they rely on, are ill equipped to cope, the report says.

Rising temperatures and unseasonable warmth is responsible for cholera and dengue fever spreading, with capacity for their transmission increasing across many endemic areas as a consequence.