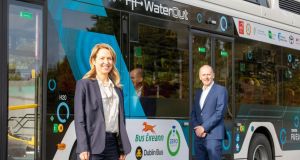 The first hydrogen-powered bus to be used in public transport in Ireland is taking to the streets of Dublin.

The bus, which will be undergoing trials over coming weeks before more extensive rollout of hydrogen buses next year, is part of the Hydrogen Mobility Ireland (HMI) initiative involving industry; academic researchers, public transport providers, energy utilities and the public sector on the island of Ireland.

The low-emissions transport will be operated on different routes by Bus Éireann and Dublin Bus, as well as by Dublin City University and Dublin Airport.

“This is a cutting-edge technology that promises to make a huge contribution to the climate challenge in Ireland, specifically in the transport sector, according to HMI.

As part of HMI’s roadmap, this trial will extend to mid-December giving real in-use information on the practical operation of the technology in varying weather, usage and traffic conditions.

The ESB, a HMI member, will provide the green electricity used to produce the hydrogen fuel for the trial; the only output from the vehicle is water.

Speaking after the bus took to the road, HMI chairman Mark Teevan of Toyota Ireland said: “This should be viewed as an important event . . . enabling us to begin to envisage the practical solutions that will allow us to fully decarbonise road transport.”

Moving Ireland’s urban bus fleet to cleaner and greener technologies “is essential if we are to further reduce the carbon footprint of our public transport system and limit air pollutant emissions in our cities”, said Minister for Transport Eamon Ryan.

“Under the Government’s national development plan, Ireland has committed to stop buying diesel-only urban buses and to transition to lower-emission alternatives,” he added.

Early next year a National Transport Authority trial involving a number of double decker fuel-cell electric buses will commence, while in Northern Ireland HMI member Energia will presently commence hydrogen production for road transport in Co Antrim, which will be used as fuel for fuel-cell electric buses in Belfast operated by Translink and manufactured by Wrightbus in the North.