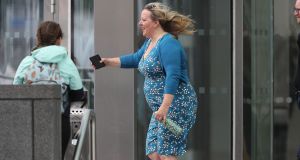 Green Party Senator Róisín Garvey warned that ‘we are in the last second, the last minute to midnight as we face a complete destruction of all we have grown up to know, and our children won’t’. File photograph: Nick Bradshaw

A Green Party Senator became emotional as she highlighted the biodiversity crisis the world faces as a result of climate change.

Senator Róisín Garvey was winding up a Seanad debate on biodiversity in which her party, which is in Government, called for action as soon as possible on programme for government commitments on climate change.

The Green Party also endorsed the Dáil’s 2019 declaration of a climate and biodiversity emergency.

Ms Garvey became emotional and stumbled over her words when she said that “the collapse of natural habitats, loss of species and degradation of our fresh and marine water ecosystems is on a scale unparalleled in human history”.

The Clare Senator said that “future generations will judge us on how we respond to this existential crisis but we are up for the challenge”.

“We all want to be able to look our grandchildren in the face and say that we did everything today we could do.”

Ms Garvey warned that “we are in the last second, the last minute to midnight as we face a complete destruction of all we have grown up to know, and our children won’t”.

She said that was why they had to put an economic value on this as well as a social value and a “health and heart value”.

Criticising Sinn Féin she said she was disappointed the party did not recognise the need for an economic value “because they are always talking about workers’ rights and the farmers are the workers”.

The farmers are the most important people they had to engage with “to protect our land and our planet for future generations”.

Sinn Féin Senator Lynn Boylan had earlier said she “winced” when she heard talk of “ecosystem services”. The global north had exploited nature for centuries and nature should be protected regardless of benefit humans might happen to accrue from it.

The former MEP said the “concept of offsets and ecosystem services are taken from the book of technocratic green-minded decision-makers who believe that something won’t be respected for its intrinsic value but for its monetary value or for what we as humans can get out of it”.

She warned that “commodifying nature is morally wrong” and if a price was put on something “there is always someone with pockets deep enough to buy it”. Ms Boylan also expressed concern about a new “neo-imperialism” in relation to nature and its economic value.

She cited as an example the establishment of a forestry system set up to store carbon but which “incentivised the planting of non-native trees” which she said described the current system in Ireland.

Speaking in the debate Minister of State for Agriculture Pippa Hackett said she recognised the significant role of agriculture in bringing nature back into people’s lives.

‘’I see my role as supporting farmers who care about land. I know that is the vast majority of them.

“But farmers who know about nature and care about nature need a range of supports so that they can move to the more sustainable, less intensive practices which will support biodiversity. I intend to deliver those supports.’’

Ms Hackett, who has responsibility for biodiversity, stressed that it was a priority and the measures in the programme for government include the “implementation of EU Green Deal environmental measures, publication of a national pollinator plan, an increase in biodiversity awareness initiatives across all levels of education, the development of policies to increase urban biodiversity, and further work to build on the foundations laid at the first National Biodiversity Conference in 2019”.

High Court president meets HSE to ensure best services for wards of court 17:45
Up to 2,000 cancers may be ‘lost’ because of Covid disruption 17:41
Man accused of assault on Kevin Lunney alleges DNA was ‘planted’ on van 17:34
Future Dublin bus services may be less frequent than planned due to Covid-19 17:31
Voting on Irish unity without follow-up plan poses grave risks – study 17:20