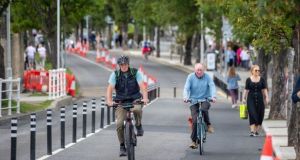 The planned expansion of cycle infrastructure across south Dublin comes following the success of the coastal cycle route from Blackrock to Sandycove. Photograph: Tom Honan

A radical expansion of cycle infrastructure across south Dublin is planned by Dún Laoghaire-Rathdown County Council, following the success of the coastal cycle route from Blackrock to Sandycove.

A network of 25km of connected cycle routes will be created using quiet residential streets, parks, and existing cycle lanes, along with access-only arrangements on some streets, the closure of parts of other streets to traffic, and the introduction of a one-way system in Deansgrange.

Three primary routes are intended to facilitate safe cycling to at least 65 schools across the county, and will see previously disjointed cycle tracks connected for the first time.

The three routes, branded Sea to Mountains, Park to Park, and Mountains to Metals, will all connect with the two-way segregated cycle path from Blackrock to Dún Laoghaire and Sandycove – the Coastal Mobility Route put in place earlier in the pandemic.

The council’s director of services, Robert Burns, said while the principle behind the three new routes is similar, that of facilitating a switch to active modes of travel, the emphasis is more directly on encouraging cycling to school.

“A lot of the existing cycling infrastructure we have is quite good, but it only gets you so far before it runs out,” he said. “The disconnected nature of that is a deterrent for parents and children. It’s those people that the active schools travel routes are targeting – who you might call the ‘interested but concerned’ cyclists.”

The Sea to Mountains route will link east to west across the county. Starting at Blackrock Dart station, crossing the N11 to Deerpark and continuing south linking to the Sandyford Cycle route and on to the Slang river greenway and Wicklow Way.

From Blackrock, a contraflow cycle lane will be installed on George’s Avenue and there will be there will be no through access for cars on Avoca Avenue at Avoca Park. At Eden Park, the junction will be altered to provide a continuous route, safe for children to use and the first part of Eden Park Road, closest to the intersection, will be closed off for cars.

The Park to Park route will link north to south across the county. Starting again at Blackrock Dart Station then joining to the existing pathways in Rockfield Park. From there it will continue south along Dean’s Grange Road linking to the Loughlinstown to Dean’s Grange greenway and ending by linking south to the coast.

One of the most significant interventions of the scheme is planned at Dean’s Grange Road. A protected two-way cycle track will be installed down to Kill Lane making Dean’s Grange Road one way for cars and buses southbound.

Northbound buses will be redirected to Abbey Road. “The impact on northbound car traffic will be monitored,” the council said.

The Mountains to Metals route will link east to west across the county. Starting at the Sandyford Cycle route, linking to Sea to Mountains and Park to Park and continuing on to the Metals cycle route.

It will also use the new Dean’s Grange Road track before continuing northwest to the Metals. Mr Burns acknowledged that introducing a one-way system in Deansgrange is a radical change, but he says it provides a vital connection for two out of the three routes.

Submissions on the plan can be made until November 6th, but Mr Burns said there will be ongoing public engagement as the routes are introduced and they can be “tweaked” if necessary. “What works we will hold on to what doesn’t work can be changed or removed.”