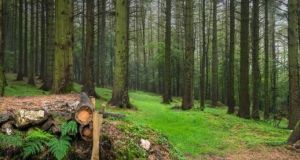 “The question now is not about (forest) owners claiming carbon credits, but are they facing a carbon tax?” Photograph: Getty Images

Ireland’s forestry is a growing source of greenhouse gas emissions rather than acting as a carbon sink, according to a report produced for the Department of Agriculture.

The finding contradicts the Government’s position that “Irish forests are a significant sink and carbon store”, Friends of the Irish Environment (FIE) said in response to the findings, which have been submitted to the European Commission.

The report, entitled FRL 2021-2015: Ireland, a National Forestry Accounting Plan, has been reviewed extensively by the European Commission, and is due to be adopted by delegated Act by the end of October.

Under EU legislation member states must ensure greenhouse gas emissions from land use, land-use change or forestry are balanced by at least an equivalent removal of CO2 from the atmosphere in the period 2021 to 2030.

The report concludes Ireland’s forest estate transitioned from a sink – capturing CO2 – to a source during the 2012 to 2017 period, with indications of likely increases in greenhouse gas emissions from 420 gigatons in 2018 to 2,161 gigatons CO2 equivalent by 2025.

While growing trees absorb greenhouse gases, disturbance to soil – drainage, and disruption through afforestation and at clear-felling stage – all release carbon from the soil, confirmed climate scientist Prof John Sweeney.

“Any hope that new afforestation can miraculously be counted to meet short-term carbon budgets is misplaced,” said Prof Sweeney. “The present forestry model grows the wrong trees in the wrong places. We must not sacrifice biodiversity in western Ireland to provide sitka spruce plantations to enable biodiversity destruction on intensive dairy farms in eastern Ireland.”

“It is an urgent call for the Government to move from the model of plantation forestry managed by clearfell to continuous cover forestry and agri-forestry schemes that enhance biodiversity and sequester carbon.

“It shows they wouldn’t listen to the science that EU scrutiny has now exposed. The question now is not about owners claiming carbon credits, but are they facing a carbon tax?” he said.

Mr Lowes claimed the amount of carbon in forest soils far exceeded the amount stored in living trees. The carbon stock, the quantity of carbon contained in a reservoir or system with ability to accumulate or release carbon, in forest soils is the dominant component, accounting for 85 per cent of the carbon in the forest estate. In practice, total living tree biomass amounts to just 12.7 per cent of the total carbon stock.

The report says the reasons for Irish forestry becoming a carbon source include the level of deforestation, including a deforestation rate of 933 hectares per annum; an increase in harvesting because of “legacy” planting; fire-related emissions; and “the increase in emissions from organic soils and non-CO2 emissions due to drainage associated with an increase in forested land”.

The figures are not based on all forest lands but on managed forest land, which represented 54 per cent of all forests in 2017 and rising to 66 per cent by 2025.

Prof Sweeney said the extent of maturing forestry over the next decade and lack of planting meant the problem would not be rectified by 2030.

As a consequence, he said, the assumption that biogenic methane could be offset by forestry sequestration was unlikely to be realised, which was bad news in the context of the programme for government commitment to reduce emissions by an averaged 7 per cent a year.

In 2017 the National Forest Inventory Publications stated “the national forest estate is an important and expanding sink for carbon at 312 million tonnes”, and had removed an average of 3.8 million tonnes of carbon-dioxide equivalents per year from the atmosphere over the period 2007 to 2016.

The estate had reached 11 per cent of the total land area, “with a wide variety of forest types present”.