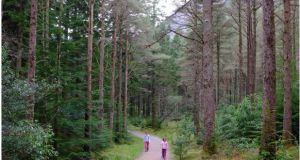 ‘If we do not protect and restore biodiversity we will fail to meet our climate goals,’ Prof Buckley has said. File photograph: Bryan O’Brien/The Irish Times

Protecting biodiversity and deploying nature-based solutions could help achieve global and national carbon emissions reduction targets, and “keep our planet liveable and maintain our wellbeing”, according to TCD professor of zoology Yvonne Buckley.

For this reason these options should be fully acknowledged in the Climate Action Bill, she told the Oireachtas Climate Committee, which is reviewing proposed legislation to introduce carbon budgets to ensure Ireland becomes carbon neutral by 2050.

“Biodiversity, a component of our natural capital, provides climate regulating services for the planet and provides us with the resilience we need in order for people, our economies and society to withstand the climate change shocks that we are already locked into,” she added.

Biodiversity was threatened by some of the same drivers causing climate change, and “if we do not protect and restore biodiversity we will fail to meet our climate goals”, Prof Buckley warned.

With some 1 million species threatened with extinction in coming decades, “we cannot tackle climate change without a consideration of the contributions of biodiversity to both climate change mitigation and adaptation”, Prof Buckley said.

By reducing emissions as the Bill aimed to do, “we will be putting in place important future protection for biodiversity . . . However, there is a risk that deployment of actions to reduce emissions and adapt to climate change may worsen existing drivers of biodiversity loss and introduce new drivers,” she said.

“Active protection and restoration of biodiversity is a nature-based solution that, if done well, reduces emissions of greenhouse gases, enables carbon capture and storage and ensures the resilience to the disruptive effects of climate change of our landscapes and seascapes, and the critical ecosystem services they provide.”

Provision should be made in the Bill for support of research into adequate measurement and monitoring of the effectiveness of nature-based solutions which are implemented.

“These data are critical for setting carbon budgets and projecting future carbon emissions, storage and capture,” she said.

“Side-lining biodiversity in efforts to mitigate and adapt to climate change will undermine the systems that give us the long term resilience we need to get through this crisis.”

In response to Deputy Christopher O’Sullivan (FF), who suggested some renewable energy technologies and adaptation infrastructure might not be consistent with protecting biodiversity, Prof Buckley agreed they must be at appropriate locations, whether on land or offshore.

If agricultural land was being used for a wind farm, that amounted to a change in land use, so biodiversity had to be assessed including the impact of turbines on birdlife. For this reason, the legislation “should comply with, and actively support, implementation of the National Biodiversity Action Plan”, she said.

Dr James Glynn of MaREI research institute in UCC said from a scientific and engineering perspective, ambiguity in some of the Bill’s language “means that one cannot measure or define whether or not commitments within the bill are being met”.

Particular attention needed to applied to definitions of carbon budgets, and greenhouse gases to be included in those budgets, he believed.

As the national objective of carbon neutrality is unlikely to be met by technological means alone, the Bill should “acknowledge the role of early dialogue and societal buy in. Behaviour change and demand reduction will be required”.

Applying a 7 per cent reduction rate in the programme for government, Dr Glynn said MaREI analyses “assume that the global temperature increase overshoots 1.5 degrees during this century and returns below 1.5 degrees by 2100”.

The scenarios without CO2 removal technologies require immediate decarbonisation at rates approximately double the rate compared to where they deployed, he added. Globally, however, development of CCS, and direct air carbon capture and storage technologies was “already far behind the technology readiness levels needed to meet the Paris Agreement”, Dr Glynn said.

Ireland has exercised its right under EU law not to allow for any storage of CO2 in the State; so currently there was no area of Irish territory free to be used for its storage – though “this will be kept under active review”.

He believed, however, there was nothing preventing the capturing of CO2 from industrial plants and exporting it to somewhere like Norway for storage, as was possible under its Northern Lights project.