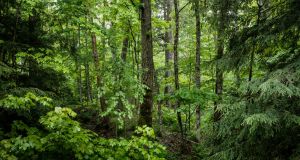 Managed forest land represented 54% of all forests in 2017 and was predicted to reach 66% by 2025. File photograph: Getty

The Department of Agriculture has denied that Ireland’s forests are a net emitter of greenhouse gasses and insisted they remain “a substantial and growing store for carbon dioxide”.

In a detailed response to a report it commissioned the department said strong reactions to the findings “are misleading insofar as they are looking only at one subset of the estate”. The paper concluded that Ireland’s forest estate – classified as “managed forest land” – had changed from a sink capturing CO2 during the 2012 to 2017 period.

The report entitled FRL 2021-2015: Ireland, a National Forestry Accounting Plan was prepared with the objective of informing Ireland’s inventory of national greenhouse gases for the next five years, as required by the European Union. Managed forest land represented 54 per cent of all forests in 2017 and was predicted to reach 66 per cent by 2025.

The extent to which emissions are occurring from that forestry category, when forests must act as a critical carbon sink to meet climate targets, was strongly criticised by Friends of the Irish Environment and climate scientist Prof John Sweeney. They claimed national forestry policy was failing to fulfil its role in capturing carbon and this was being exacerbated by “the wrong trees in the wrong places”.

The role Irish forestry is playing in capturing CO2 was defended by commercial forestry sector spokesman Mark McAuley, who is director of Forest Industries Ireland.

“In Ireland, our forests produce timber at three times the rate of Scandinavia. They are a major carbon sink. Forestry in Ireland is therefore already a big part of this island’s fight against climate change,” he said.

“Irish forests are capturing 3.6 million tonnes of CO2 yearly. The total carbon store is over 300 million tonnes. This is testament to the policies of successive governments to plant trees and create a vibrant forest sector.”

Notwithstanding this, Mr McAuley said the sector is in crisis. “Tree planting has been decimated and our sawmills have run out of timber. Jobs have been lost and companies are in danger. This has been caused by the introduction of a new regime for forestry licensing and a failure of this new regime to provide the licences that are needed to plant trees and fell timber.”

While managed forest land, because of particular circumstances and timing, will be a small emitter over the upcoming period, the amount “will be far outweighed by what the rest of the estate is storing and sequestering”, noted the department.

Afforested land includes all forests that will be 30 years of age or less during the accounting period 2021-2030, that is any new forests planted since 1991 and all new forests planted over the next decade. “Over that period they will be a significant sink for carbon dioxide, sequestering well over 1 million tonnes of CO2 per year, when harvested wood products are included, over the period 2021-2025,” it added.

Forests in the managed category include all forests that are older than 30 years of age during the period 2021-2030. It is estimated that over the period 2021-2025, when harvested wood products are included, these forests will be a small net source of approximately 0.1 million tonnes of CO2 per year.

“However, it is important to recognise forests are replanted after harvesting and as forests mature the projection is that these forests will return to being a sink,” it added.

Minister of State with responsibility for forestry Senator Pippa Hackett said: “There is a climate crisis and whether we deal with it successfully will depend greatly on how we utilise our land in the future . . . I fully understand the alarm with which many greeted reports on Ireland’s forests becoming a net emitter of greenhouse gases and I am very happy to see my department clarify the situation.”

Forestry has an important role to play in climate change mitigation, she added. “Forestry . . . supports many thousands of jobs. And I am very mindful of the importance of integrating the industry with other community and climate considerations as we strive to develop a new model for it, one which will work for all, while planting the right tree in the right place.”