College Green plaza to double in size under new plans 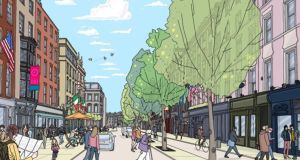 An artist’s impression of the plans. Image: Dublin City Council

Plans to double the size of the proposed College Green plaza, extending the traffic-free zone to South Great George’s Street, will be published by Dublin City Council on Thursday.

Under the new plans, buses, cars and taxis will be banned from just west of the Luas line in front of Trinity College, for a distance of 350m along Dame Street to South Great George’s Street, with restrictions on deliveries in the area.

The previous plans for the cycle and pedestrian plaza, which were rejected by An Bord Pleanála in 2018, would have seen the plaza end close to Anglesea Street, the first turn into Temple Bar west of College Green. A turning circle would have been in place at this point for buses to return down Dame Street.

However, the council’s head of traffic, Brendan O’Brien, said the National Transport Authority’s redesign of the bus network and the success of pedestrianisation trials during summer 2019 had led to the decision to extend the plaza.

In November 2018 the planning board rejected the council’s plans for a pedestrian and cycle plaza scheme due to concerns about the “significantly negative impacts” it would have on bus movements and on traffic, particularly on the city quays .

Six weeks ago the NTA, as part of the BusConnects project, published the Dublin bus network redesign, which is due to change bus routes throughout the city from next year.

While one core route, Spine A, which includes buses running from areas such as Drumcondra and Santry on the northside to Rathgar and Terenure, has been routed through College Green and Dame Street, the NTA’s final designs, published in September, included an option to reroute this Spine to Nassau Street and St Stephen’s Green.

Mr O’Brien said this, along with the spread of buses on different alignments across the city, and two-way bus running on Winetavern Street and Westmoreland Street, had allowed the council to eliminate the need for the turning circle on Dame Street and to extend the plaza zone. The plaza also no longer required the movement of “any significant number of buses to the quays”, he said.

For the purposes of public consultation, the council has defined the plaza as two areas: the “core plaza” from the Luas line to Anglesea Street, and the “outer plaza” to George’s Street. Consultation will be held until January 15th on whether vehicular deliveries should be allowed in the outer plaza on a 24-hour basis or only until 11am. No vehicles will be allowed in the core plaza.

City architect Ali Grehan stressed that the consultation was not about the merits of having a College Green plaza.

The council intends to submit a fresh application to An Bord Pleanála for the extended plaza next summer.