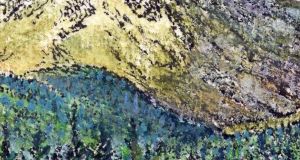 Cocooned amid flurries of wind-torn leaves, I can lift mine eyes unto the Mayo hills and bend my gaze across the sea to Connemara. And now, thanks to two poets with new books, I have been taken on some marvellous excursions .

In north Mayo, Sean Lysaght has already brought landscape and wildlife alive in accomplished poems and a saga of hilltops that once sheltered golden eagles. Now, in Wild Nephin (Stonechat Editions), he confirms his role as gifted chronicler, bard and Sherpa of the new wilderness in the making.

The awesome spatial volumes of the Nephin hills prompted Robert Lloyd Praeger, Lysaght’s hero, to praise a landscape “frightening in its isolation” but exalting to the soul. He did not seek the cultural resonance devoted to it here. Lysaght, fluent in Irish, values its names for every twist and hillock of the land and for its generous fabric of folklore. Along with his journeys in the natural world, he restores a rich local history to this bleakly depopulated corner of Connacht.

They are not what one may visually expect, each a straight-edged block of text of perhaps a couple of hundred words

His series of walks, in autumn and winter, are each intensely topographical, their textures, sights and sounds minutely observed and felt. One shares the sogginess of marsh, the floundering through heather, the occasional need to curse a “bitch of a ground”. But there’s also the lift of the summit and a share in the “rush of air in ravens’ wings”.

This intimate experience of landscape is expressed on a par with writers such as Tim Robinson and Robert McFarlane. It comes enriched by excursions with falconers and hunters and his own nights lamping streams to count their sea trout. Meanwhile, his passion for birds brings his first Mayo sight of a golden eagle and a quest for nesting greenshanks (“They are there, for those determined to find them”).

Lysaght’s mapping of Wild Nephin spreads widely through north Mayo, from the wind turbine bogs of Bellacorick to the Clew Bay shore near Mulranny where he camped among the sanderling. But the heart of this territory is the Nephin Beg range of mountains and its adjacent conifer plantations, officially marked as a “wilderness” area reserved for natural regeneration, biodiversity and “primitive recreation”.

It is modelled on existing American projects and Lysaght notes the “clashing recognitions” at the edge of the Nephin forest. “This scene,” he writes, “of mountain and conifer, is like an American image and appeals to that part of our imagination that has been shaped by the cinematic wild west of north America and the frontier of the Rocky Mountains.”

The whole idea of “rewilding” a forest of redundant, alien conifers has prompted controversy. Lysaght, however, is ready to be excited. Given the patterns and symbols familiar from Ireland’s natural world, Wild Nephin could, he thinks, offer “a frontier for fresh meanings”.

The other poet to lift me away from the acre has a second home across the bay on the Renvyle peninsula of Connemara. This, as it happens, is where I spent a sabbatical winter more than half a century ago while deciding to make Ireland my first home. When Eamon Grennan writes of landscape and wildlife in the lee of Tully mountain, he thus revives many snapshots from that first, eager sojourn.

Grennan, a Dubliner, was also swapping cultures when, graduating from University College Dublin (where he met Derek Mahon and Eavan Boland), he went on to earn a PhD at Harvard. The US absorbed him as a professor of English at Vassar College until 2004, when retirement eased his commuting from Poughkeepsie, New York, to his cottage among the fuchsia and stone walls under Tully hill.

Plainchant (Gallery Press) is his 11th collection, adding prizes along the way. The title is an inspired choice for poems which aim, as Grennan has said, “to marry speech patterns to musical language”.

They are not what one may visually expect, each a straight-edged block of text of perhaps a couple of hundred words. Many flow from start to end with only a final full stop. Does this make them poems or compellingly poetic prose, its swinging rhythms hinged on colons and semi-colons?

Whatever they are, they work marvellously, as buoyantly persuasive as Robert Frost or James Joyce. Many share encounters with animals and birds, but quoting from them is like snatching bars out of music.

“Knacky keen and swift was the flighty hare that flitted almost up to me in Fogarty’s near field” begins one breathless event. In another, Grennan wonders what to sing to seals, “those three pitch-eyed salt-slick hound-heads gazing unblinkingly back at me”.

Wrens and jackdaws, cows and horses; each meeting with a fellow creature seeks to reach more deeply into “one life, quick-snatched as it’s passing and in vain snatched at”.