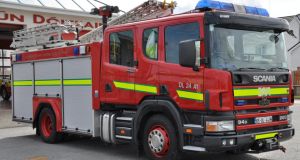 A man watched his house go up in flames as the local fire station remained empty because firemen were being interviewed for new posts.

John Fitzgerald (72), from Station Road in Falcarragh, Donegal, was forced to flee his home after the fuse box caught fire.

He lives 200 yards from the local fire station. However, the three local fire officers could not respond to the call as four other officers were away doing interviews in Stranorlar – 52km away.

Under regulations, fire tenders must be manned by six personnel when answering an emergency call.

John said he had to wait 30 minutes until the nearest fire tender arrived from Gaoth Dobhair.

He said, “I was sitting having a cup of tea about 9.30am on Monday when I heard a noise and saw the fuse box was on fire. I called 999 immediately.

“I was outside looking up at the local fire station but nobody seemed to be gathering to answer the call.

“My daughter called the emergency services again and it wasn’t until after 10am that the fire service from Gaoth Dobhair arrived.

“It was just lucky that a family were not trapped inside because they would have all been dead. We could have had a real tragedy.”

John, a former chairman of Falcarragh GAA Club, added that his daughter had since contacted the fire service headquarters in Letterkenny and had been informed there would be no charge for the call-out.

A spokesman for Donegal County Council said a contingency plan had been put in place to deal with such emergencies in the Falcarragh area. The spokesman said Falcarragh Fire Station had been stood down but that firemen from the Gaoth Dobhair area had been put on standby.