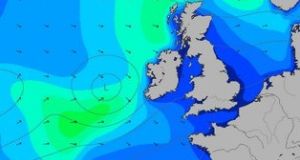 A chart showing the anticpated arrival of the weather system off the west coast of Ireland on Saturday afternoon. Image: Magicseaweed.com

Heavy rain and strong winds are set to hit most of the country on Saturday as the tail end of Storm Ernesto reaches Ireland.

The sub-tropical storm hit the southeast of Cape Race, Newfoundland, Canada late on Wednesday, with winds of 65km/h, according to the US National Hurricane Centre (NHC).

Storm Ernesto is currently somewhere above the mid-Atlantic and is forecast to hit the west coast of Ireland from 8pm on Saturday, according to NHC updates.

Forecasting service AccuWeather said as the storm unravels in the Atlantic it could combine with a non-tropical storm before reaching Ireland and Britain, bringing heavy rains and strong winds.

Friday is set to be cloudy and breezy with rain becoming widespread during the morning. The rain will die out in most places in the afternoon and evening leading to good dry periods.

However, the wet weather will continue in parts of Ulster and Connacht. Temperatures on Friday will range between 16 and 20 degrees.

Met Éireann said it expected Saturday to be humid and close with dry and warm weather in many areas with sunny spells in the south and east and temperatures ranging between 20 and 25 degrees over much of Munster and Leinster. Top temperatures in the north and northwest will range between 16 and 19 degrees.

Rain is forecast in some parts of the north and northwest during the afternoon and will become heavier into the evening as the remnants of Storm Ernesto hit the Atlantic Seaboard.

The storm will also bring fresh, strong winds along western coasts with temperatures dropping to between 14 and 17 degrees overnight.

The good news is the rain will clear on Sunday to bring dry and bright conditions for Galway and Limerick supporters as they descend upon Croke Park for the All-Ireland senior hurling final.

It will be a damp, wet start on Sunday with mist and low cloud for a time in the morning.

However, the dull, wet conditions are forecast to clear bringing dry and bright weather through the afternoon with some light showers in places. It will be a humid and warm day with temperatures in the high teens or low 20s.

The warm, humid weather is expected to continue into next week with temperatures in the high teens and low twenties on Monday and Tuesday.

It will be cloudy in many areas with scattered outbreaks of rain and showers at times but also good dry periods with sunny spells. Tuesday will bring heavier rain to western parts of the country.

Despite recent rain, Irish Water said it will take a sustained period of rainfall over many weeks and even months to fully replenish water levels in rivers, lakes and groundwater sources and also the treated drinking water levels in storage reservoirs, particularly in the east and south of the country.

As a result, Irish Water has asked customers to continue to try and conserve water by taking a short shower instead of bath, turning off taps and fixing leaks.

The nationwide hosepipe ban, introduced earlier this summer, will remain in place until August 31st.

The ban will be reviewed towards the end of the month to ascertain whether it can be lifted in September.

1 Coronavirus: NPHET meets amid growing coronavirus cases in Kildare, Laois and Offaly
2 Officials refuse to rule out ‘Midlands lockdown’ following Covid-19 surge
3 Masks Q&A: Who has to wear them in shops and what happens if you don’t?
4 Reopening of schools in many EU countries has not led to Covid-19 increase, ECDC report finds
5 Ireland's 'R number' of almost 2 a 'serious concern' as number of new cases jumps
Real news has value SUBSCRIBE