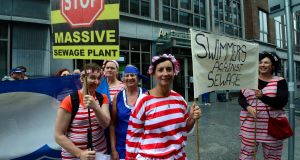 Undeterred by cold and showery weather, the Red Hot Mommas – a women’s swimming club whose members use the strand on a daily basis – said they were representing many concerned beach users as they handed in submissions to the planning appeals authority on Marlborough Street, Dublin.

It was the closing date for submissions on a planning application lodged by Irish Water for a regional waste-water treatment plant planned for north Dublin and an outfall discharging into the Irish Sea. They were joined by more than 30 supporters, all regular users of the beach.

The €500 million Greater Dublin Drainage project proposes to locate the facility in Clonshaugh with an underground sewer from Blanchardstown to Clonshaugh, a new pumping station at Abbotstown and an outfall pipeline to discharge treated water offshore of Velvet Strand.

The proposed outflow is near Ireland’s Eye and only a few kilometres from the strand, according to club spokeswoman Catherine McMahon. “It is unique in that it is the only beach on the east coast to hold both the Blue and Green Flags, for excellent bathing water, environmental quality and community involvement,” she added.

Objections have been submitted by many concerned groups along the course of the proposed development, who will have to deal with “the myriad of problems that could result with this ill-conceived plan”, she said.

“This is a big issue for us. It will affect our lives; those of everybody in the area and tourism ...The local community have worked very hard to get our blue and green flags,” Ms McMahon said.

Over a fine weekend, the beach attracted crowds of more than 25,000 people, she noted, underlining how many would be affected if water quality deteriorated.

The drainage project is designed to serve the growing population of Dublin and parts of the surrounding counties of Kildare and Meath, which is projected to increase by 450,000 people by 2040, a spokesman for Irish Water said.

The volume of waste water generated in greater Dublin is projected to increase by more than 50 per cent over the next 30 years.

The facility would also provide additional treatment capacity to supplement the Ringsend system from the mid-2020s, when it reaches maximum capacity, he said.

Extensive modelling of the marine environment was undertaken for the project, the spokesman added. “The proposed marine outfall is 6km out to the Irish Sea and the level to which the waste water will be treated will ensure the water quality standards required by EU and national regulations are achieved.”

At the point of discharge, the outfall pipe will output about 23m below sea level. “The water depth and tide and current patterns will allow for optimum dispersion and assimilation of the treated water within a short distance of the discharge point.”

The project would have “an imperceptible impact on the water quality of the coastal waters off Co Dublin”, he said.

The planning application is available at gddapplication.ie