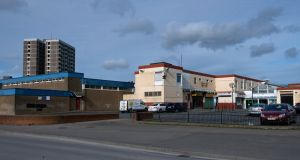 The redevelopment of the old Ballymun shopping centre, the last remaining outpost of the 1960s high-rise suburb, has moved a step closer with Dublin City Council securing vacant possession of the site.

The council last month published plans for the demolition of the 50-year-old shopping centre that has blocked completion of the regeneration of the north Dublin suburb.

The opportunity for public submissions on the demolition plans expired this week, with no objections lodged to levelling the old complex. However, several residents, businesses and community organisations have raised concerns about the loss of car parking associated with the demolition.

There are just under 400 parking spaces on the shopping centre site. The council plans to retain about half these spaces, but around 180 will be within the demolition area and will be removed from use.

City councillors last March approved the demolition of dilapidated centre, but the council could not go ahead with the work until the final tenants had left the complex. A spokeswoman for the council has confirmed that vacant possession has now been secured.

The council hopes to begin demolition shortly and will separately offer the site to the market for redevelopment as a retail and residential scheme.

Independent councillor Noeleen Reilly said there must be no delay in redeveloping the site.

“The Ballymun Shopping Centre is the single biggest reminder to anyone that lives in Ballymun what went wrong with the regeneration,” she said. “The last thing we need is a gapping hole in the middle of our town centre for the next decade. There should be no delay in Dublin City Council advertising this land to interested parties.”

The redevelopment of the shopping centre, known as the Town Centre, was central to the 1997 Ballymun regeneration plan. In 2000, Treasury Holdings paid more than £6 million for a 53 per cent stake in the site, with the council retaining the remainder. The new complex, which was to be the main shopping facility for the suburb’s 18,000 residents, was due to be built in 2005.

However, it was not until 2009 that Treasury secured planning permission for Springcross, a vast €800 million development, which was to include an 11-screen cinema, bowling alley, public library, creche and restaurants, as well as more than 70 shops and offices.

It had intended to begin construction the following year, but the economic crash intervened and the town centre lands became part of Nama’s portfolio of loans before any development began. Most retailers in the centre subsequently shut up shop and, in early 2014, it lost Tesco, its anchor tenant.

In May 2014, the council reached agreement with Nama and its receivers to acquire the Treasury stake. Two years later the council sought compulsory purchase orders to gain clear possession of the site.