The Kerry slug trail leads all the way from Spain 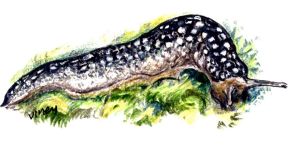 The projected €2 million cost of moving an unknown number of a rare Kerry slug, Geomalachus maculosus, out of the path of a new dual-carriageway on the Cork-Kerry border makes it timely to recall how they crept to Ireland in the first place.

This brightly spotted and highly protected slug is one of our “Lusitanian” species – that is, it occurs in limited areas of southwest Ireland and northern Iberia without any record of the species anywhere else.

Genetic research has already proposed that another Irish gastropod, the banded snail Cepaea nemoralis, abundant in our sand dunes, came with Mesolithic travellers from the eastern Pyrenees more than 8,000 years ago, for whom the snails were a takeaway food.

More recent genetic research on the Kerry slug has found strong links with those sampled from stone walls, tree trunks and rocks in northern Spain and Portugal. Significantly, however, while the Spanish slugs have evolved small genetic differences between their local populations, the slugs in Ireland are still genetically quite uniform.

This suggests, says the research, a post-glacial introduction of “only a few founding individuals”. And since there is no record of prehistoric Spaniards munching slugs, it concluded, they possibly arrived in packing for cargo, such as bushes stuffed around pottery amphora.

Judging how many live in Ireland now is quite problematic, given their night-time feeding and mostly daytime concealment beneath sandstone boulders, inside mosses and in crevices up trees. The National Parks and Wildlife Service has given them nominal protection in seven Special Areas of Conservation (SACs), including the Killarney National Park and other huge stretches of mountain, bog and woodland.

Many disputatious years ago, plans for a badly needed 22km bypass to replace a slow, twisting road west of Macroom routed it through Cascade Wood at Ballyvourney, with its “magical gorge”, as environmentalists knew it. For unconnected reasons, no survey of the wood had been executed.

Their whistleblowing in Brussels brought a European Court order to give the slug strict monitoring and protection. Its discovered abundance in the old sessile oakwood, along with seven kinds of bat and the protected freshwater pearl mussel, brought an SAC and responding change in the route proposed by the National Roads Authority.

Historians then warned that the revised line of the road would impinge on key sites of archaeological, architectural and cultural importance. This forced another look at the options. In 2007 An Bord Pleanála chose one that will cost some €2 million, or about 1 per cent of the bypass bill.

This will leave the dual-carriageway on its original course, but resettle the slugs from 44 acres of lost land to a similar size of habitat away from the tarmac. An RTÉ1 television news report found an engineering team from Cork County Council beginning the transfer of mosses and lichened rocks to help recreate a nourishing home away from home.

An assessment for the council specified “a fingertip search for the slugs beneath all suitable refuges” as well as leaving felled trees for several days before logging and removal, then using the logs as habitat piles in the remaining woodland.

A best estimate on the density of slugs came from fieldwork at Ballyvourney by Dr Roy Anderson for the National Roads Authority. He found up to 10 adult slugs in the bottom two metres of stem of mature ash or oak trees, and up to two adults per square metre of exposed lichen or moss-clad rock.

Indeed, all the signs have been that Geomalachus has been doing very nicely in southwest Ireland and is among the least threatened species of the island’s wildlife, barring new roads and bungalows , invading rhododendron and the spread of moorland fires.

Discovery of Kerry slugs beneath conifers in Cloosh Forest in Connemara, probably transferred with Coillte’s machinery, has raised new issues of management and protection. With the extra warmth and rain of climate change, conifer forestry could offer the slugs a new habitat.

In northern Spain and Portugal, rising heat and wildfires add to the threats from logging of chestnut and oak trees and deepen Europe’s concern for the species’ conservation in Ireland.

As a sceptical friend likes to ask on these occasions: “What good are they?” The slugs are an easy target for disdain and were often wrongly blamed for delays in launching the bypass (now to be finished in 2023). The cost of hand-gathering them for relocation must challenge even further the popular enthusiasm for saving biodiversity – especially since, unlike sea eagles, slugs are short of tourist appeal.

When touched, Kerry slugs roll up into a ball, like a hedgehog, a habit still unique among Ireland’s 32 slug species. They can also stretch into a thin sliver of tissue, extending a nominal 8cm or so to twice that length or more. A Houdini-like ability to squeeze through tight spaces has been attested to by disappointed field scientists opening their containers at home.