‘Incalculable damage’ could be done to Marlay Park, say locals 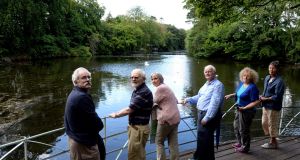 “Incalculable damage” would be done to Marlay Park in south Dublin if Dún Laoghaire-Rathdown County Council’s proposed masterplan for the park goes ahead, according to a local group.

The Protect Marlay Park group claims provision for pop concerts and plans for a new bridge across the lake, together with the removal of trees, would destroy the park’s historic vistas.

Marlay is a regional park in Rathfarnham consisting of about 100 hectares of estate land associated with Marlay House.

The council describes the house as “an important component of the historic landscape on the fringe of Dublin City” and “an impressive example of an 18th-century walled demesne”. The house is set in the foothills of the Dublin mountains amid landscaped parkland, woodland and serpentine water courses and includes a courtyard and walled gardens.

Following an information meeting in Marlay House last Thursday night, the Protect Marlay Park group was sharply critical of the masterplan, calling for it to be postponed until more documents on the built and natural heritage were circulated and considered.

The group said it was “particularly disappointed” that the masterplan takes emphasis from a document entitled Built Heritage of Marlay Park commissioned from specialist consultants, which the group said was not available to the general public. Spokeswoman Mary Kelly said the group was denied access to the document, on the basis that it is still only at the draft stage.

Ms Kelly said it was “also disappointing” that there is no reference to any historic landscape assessment having been carried out by the council, “as is recommended by the Department of Culture, Heritage and Gaeltacht”.

The parkland and the lake were laid out by Thomas Leggett and later Hely Dutton, and the design is greatly influenced by the work of Lancelot “Capability” Brown, the famous English landscape architect.

According to drawings made in the 1830s by Anne La Touche of the banking family who once lived in the house, the layout of the park and lake appears to have changed little, although paths, bridges and car parks have been added in recent years.*

However, Cathaoirleach Ossian Smyth said he would ask council staff to ensure that all documents relied upon in the draft masterplan were made available to those who wanted to comment.

“If necessary we can extend the period for public consultation,” he said. Mr Smyth said Marlay was a very important park and having “excellent parks” was something the council did very well. He would not comment on individual submissions until he had read them, but he was “delighted” so many people were interested in the parks.

While calling for the masterplan to be deferred, the Protect Marlay Park group has made a submission on the proposed management of the demesne.

The group said the proposed bridge across the pond “must not be constructed” as it would violate the principles of the “Brownian-style landscape”.

“In such landscapes, the ‘serpentine’ ponds are uninterrupted. Bridges are placed at the ends of ponds and not across them. This is the case in Marlay Park,” the group said.

The submission also calls for the authentic woodland pathway adjacent to the GAA pitches to be retained. The group said this path has not been surfaced with tarmacadam and is an example of what the historic paths in Marlay looked like. It also said the Grange Road toilet block should be retained and its bat roosting potential supported. If no longer to be used as toilets, this building could be used for educational purposes.

Among other recommendations the group said the weirs should be repaired, metal railings should be removed from the woodland bridges adjacent to the weir and made good in accordance with the original landscaping.

The group complained that a ha-ha in the grounds, essentially a ditch that prevented cattle from moving across the landscape without the visual intrusion of a fence, should not be subject to any further disturbance such as the placing of temporary bridges across it for concert use.

The group was particularly critical of the impact of concerts on the natural environment saying bats and grebes which are protected species have been impacted and may be in decline.

The masterplan is available on the council’s website, dlrcoco.ie, and many of the reports on which it is based are accessible. Submissions or observations should be made by August 17th, prior to the plan being finalised.

1 Transgender Cork farmer (65) surprised at positive response to telling her story
2 Bobby Storey: The IRA's planner and enforcer who stayed in the shadows
3 Q&A: How close are we to having a Covid-19 vaccine?
4 Covid-19: Mother and daughters moved into nursing home to tend to elderly residents
5 Unflappable ‘Dr Tony’ became public face of Covid-19 crisis response
Real news has value SUBSCRIBE