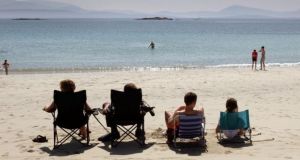 Weather matters: A specially formed team at the Central Statistics Office, alongside Met Éireann, has been transferring the daily data to its computer system.

A painstaking trawl through two centuries of daily Irish weather reports is expected to deliver new insights into how climate change might be affecting the country.

Once complete, the project will open a treasure trove of information that will benefit our understanding of everything from farming practices to the pattern and prediction of major weather events.

However, to date, our understanding of historic pre-1960s weather patterns has been limited to monthly summaries of these, offering a less-than-perfect picture.

A specially formed team at the Central Statistics Office (CSO), alongside Met Éireann, has been busy transferring the daily data into its computer system. Once collated, those behind the project believe it will lead to a far more precise understanding of weather patterns dating back to 1830.

“Because the weather is so variable, the longer the time series you have the more you will be able to determine whether you think there is something different happening that is arising from human activity,” said Gerry Brady, the CSO senior environmental statistician leading the project.

While it will not be finished until the spring, statisticians have so far been able to compile a snapshot of data between 1931 and 1959.

Together with existing electronic records from 1960 on, they will begin to give the first clear picture of trends going back through the decades.

Once the Phoenix Park project is finished, the CSO team will begin analysing another part of the country, eventually building a national picture.

“There aren’t copies [of the original ledgers]. That’s why we never asked for the originals, we just asked for scanned images,” said Mr Brady.

It is taking the team about six hours to input the data of each month – meaning the entire project will take about 9,360 hours to complete.

Such complex material is unavailable in most countries and statisticians believe it will be of vital importance given Ireland’s geographical location on the western fringe of Europe in the Atlantic Ocean.

Importantly, it will help analysts take a long view of weather before and after the growth of industry and emissions, particularly in terms of increasing motor and air travel from the 1970s.

Monthly data summaries had previously been extracted for research. However, while they gave some historical understanding they clouded the specifics of what was happening throughout any given month.

For example, if one April recorded a total of 40mm of rain then the average would show 1.3mm per day. However, if there had been only two days of rain with about 20mm per day then the true picture of 28 dry days would be hidden to anyone looking back. The project will expose those blind spots.

In the period modelled to date, the CSO found that the only heatwave – five consecutive days of 25 degrees or over – occurred in June, 1949 when temperatures reached a high of 83 degrees Fahrenheit (28.3C). That heat wave was far more humid than the one this summer.

It looked at heavy rainfall and found the wettest day of its sample period (71.3mm of rain) was on August 21st, 1955.

Changing temperatures in a certain part of the country could have implications for approaches to farming – what crops are planted and when. The data can help to understand the movement of species; the arrival of migrating birds and the possibility of mosquitoes.

“Opportunities arise and threats arise if there are changes to the climate,” said Mr Brady. “It’s difficult to predict weather and the more data you have the more informed should be the predictions.”