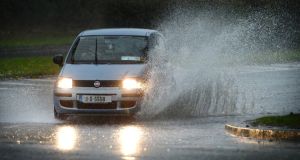 Heavy rains are reportedly on the way this weekend, when the remnants of Storm Ernesto are forecast to hit Ireland.

The NHC added that some additional strengthening is possible during the next 24 hours for the system, and it is expected to become a post-tropical cyclone on Thursday night or early Friday.

Forecasting service AccuWeather said that as the storm unravels in the Atlantic it could combine with a non-tropical storm before hitting Ireland and Britain, bringing heavy rains and windy conditions.

This weather system is forecast to hit Ireland on Saturday.

Met Éireann said the weekend would start out as mainly dry, with a few patches of drizzle on Friday night and early on Saturday.

However, as Saturday progresses, heavy rain will develop along the Atlantic seaboard and will become widespread early on Saturday night.

The forecaster said it will also “become humid and warm, with top temperatures of 18 to 20 degrees Celsius in the west and north, and between 20 and 25 degrees over Munster and Leinster”.

On Saturday night there will be gusty south to southwest winds, which will be strong in some coastal areas.

Sunday will see more rain in the morning, but it will turn drier and brighter in most places by the afternoon and evening. – Additional reporting: Reuters