British naturalist David Attenborough, 92, was among those honoured at the Crystal Awards which kicked off the World Economic Forum event in Davos on Monday (January 21). In his acceptance speech he asked for governments to take climate change action 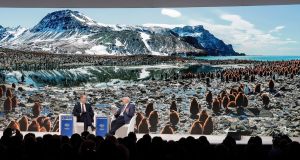 “It’s difficult to overstate the climate change crisis,” Sir David (92) said in an interview with the Duke of Cambridge at the annual event in Davos, Switzerland. “We are no so numerous, so powerful, so pervasive, the mechanisms we have for destruction are so frightening, we can exterminate whole ecosystems without being aware of it.”

The nonagenarian, who received a Crystal Award for his leadership in environmental stewardship on Monday evening, on the eve of the WEF, said that since the connection between the natural world and the urban world has been widening ever since the industrial revolution began in Britain in the 18th century.

“This creeping disaster which is overtaking the world, and is in danger of damaging it beyond repair, it started with the industrial revolution,” he said.

“Now there are more people living in towns, in conurbations, than are living in the wild. The majority of humans are out of touch with the natural world. We have to be aware of what we are doing,” said the broadcaster, whose latest series, Our Planet, created with the World Wildlife Fund, is set to be streamed on Netflix in April.

Still, Sir David said that emphasis that this year’s WEF is placing on the natural world “is one of the most optimistic things I’ve seen for a very long time”, adding that the “pact between the natural world and humanity” needs to be restored.

He said that the growing importance of renewable energy is also a source of optimism, as is the Paris Climate Agreement, struck in late 2015, and aimed at limiting global warming to 1.5 degrees over pre-industrial levels. A report by the UN Intergovernmental Panel on Climate Change, published in October, warned that there are only 12 years for global warming to be kept to a maximum of 1.5 degrees and avert catastrophe.