Storm Ophelia: ‘It was like someone got into a bad mood and smashed the whole place’

One year on: Owner of Co Cork tree nursery says it will a decade to build his stock back up 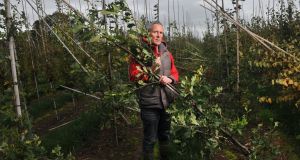 The owner of a tree nursery business in Co Cork has said it will take a decade to build his stock back up to what it was before storm Ophelia devastated his crop.

Storm Ophelia tore across Ireland on October 16th last year, leaving almost €70 million worth of damage in its wake.

“It’s been disastrous,” says Mr Ahern, who has only managed to get the place fully tidied up at the end of August, almost a year after the storm.

“Storm Ophelia wasn’t just straight line, low wind - this was swirling wind like a vortex and it’s unbelievable what it did….it was like someone got into a bad mood and smashed the whole place,” Mr Ahern says.

It is hard to quantify the amount of money he lost when his crop was destroyed because some of the trees were planted 8 to 10 years ago and he had spent a lot of time and money looking after them in that time.

He repaired what he could, getting trees standing up straight again, but half of those ended up dying off later in the year.

So far he has not received any money from the Government to help with these losses, though the Department of Agriculture has offered him aid of €10,000 through a Government grant scheme which he is hoping to receive in the next few weeks.

Mr Ahern says there is an insurance policy that he could get, but he doesn’t have it because “it’s absolutely astronomical”.

“I’d say it would be 20 per cent of the value of your crops every year just for the eventuality that that it might happen - you just couldn’t pay it,” Mr Ahern says.

It will take another 8 to 10 years for Mr Ahern to build his stock back up to what it was before the storm, and it will “affect us for the future for the the next couple of years”.

He remains positive about the future, though, and is looking forward to an improving economy and a strong nursery business.

“You just have to keep your head down and keep going. I was lucky enough there was only one handy order at the time, if there had been a big order it’d have been an absolute disaster, so I managed to avoid that. It could have been a lot worse,” Mr Ahern says.