May 3rd, 2018: Two schools that have been central to the opposition to the proposed Metrolink route through Na Fianna GAA clubs grounds on Mobhi Rd in Glasnevin, Dublin have held a protest on the grounds. Video: Eanna O'Caollai 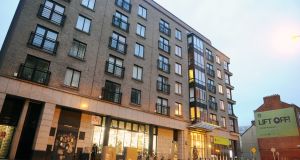 Dublin City councillors have objected to plans by the National Transport Authority to demolish a public swimming pool and an apartment block to make way for the MetroLink rail line.

The Markievicz Leisure Centre on Townsend Street, which was refurbished by the council two years ago at a cost of more than €1 million, has been earmarked for acquisition and demolition for the construction of an underground station for the €3 billion line.

College Gate, a complex of 70 apartments above the leisure centre, would also require demolition under the plans to provide a new transport “hub” next to Tara Street station.

Details of the preferred route, which combines the previously planned Metro North from Swords to the city centre with an upgrade of the Luas Green line between Charlemont and Sandyford, were announced by the transport authorities last March.

A number of councillors are writing to the NTA to seek an urgent meeting to press the authority to find an alternative route to facilitate the construction of the underground line that is due to start in 2021 and take six years to complete.

Independent councillor Mannix Flynn said the plans would result in the “destruction of a community and an amenity” in the inner city.

“In a time where we’ve got citizens on our streets and we have an outcry about the lack of housing, here you have a situation where the NTA proposes to demolish and make homeless 70 apartment owners.”

Labour councillor Dermot Lacey said the authority was holding a “wrecking ball over the city” and leaving people in limbo. The council had a responsibility to defend residents as well as a “responsibilty to our own leisure facility we pumped a fortune into not so long ago”, he said.

Fine Gael councillor Kieran Binchy said he was “astounded” at proposals to knock down the building. “I don’t think this would happen if the building was in Dublin 4.”

He said it showed “disrespect to the inner city to suggest knocking a residential building at a time when we should be encouraging people to come in and live in the city centre”.

Owner-occupiers, tenants and landlords at the apartment complex have formed the Save College Gate group in an attempt to prevent the demolition of their homes. The group said there were alternative sites available in the area which could be used for construction of the underground station, including the site of the recently demolished Apollo House on Tara Street.

The NTA earlier this year agreed to review aspects of the MetroLink route following campaigns against the use of land owned by Na Fianna GAA club in Glasnevin and the closure of a road linking Rathmines and Ranelagh in south Dublin.

Taoiseach Leo Varadkar said the proposals would cause “enormous damage” to the schools and sports clubs that use the Glasnevin lands.

Minister for Housing Eoghan Murphy asked the authority to scrap the closure of the through-road from Dunville Avenue to Beechwood Road in Ranelagh, which would force motorists into a 1.2km detour.

The NTA said it hoped to publish revised route plans shortly, but said it was not in a position to say whether the College Gate demolition would be reconsidered.