High tides and strong winds battered Galway's coastline but flooding was minimised due to an 'aquadam' and use of flood gates. Video: Joe O'Shaughnessy 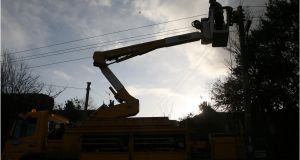 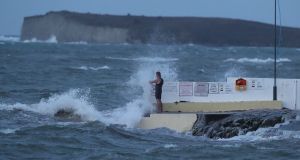 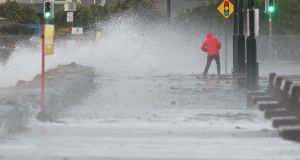 Storm Callum has caused less destruction than was expected, according to the National Emergency Coordination Group, with hundreds of households still without power on Friday evening.

The households still without power are situated along the western seabord including counties Kerry, Clare, Mayo and Donegal.

The storm swept over the country on Thursday night, bringing powerful gusts of more than 110km/h and disrupting transport services in many parts of the country.

However, by Friday morning much of the disruption had been resolved and the storm’s impact was not as bad as had been expected.

“Storm Callum tracked as forecast by Met Éireann with the worst of the storm affecting the west coast and fortunately did not hit in all areas as hard as it could have, resulting in minimal disruption,” a statement from the National Emergency Co-ordination Group said yesterday.

“Thanks to preparations by all agencies involved, coastal areas were protected from certain flooding. Galway in particular was protected by the aquadam put in place.”

ESB Networks said 60,000 households were without power at the peak of the storm which occurred around 4am. Crews actively worked to restore power to those affected. By 7am that number was reduced to 30,000 mostly clustered in Kerry, Cork, Kilkenny, Limerick Mayo and Monaghan.

Northern Ireland Electricity’s teams say that all but 150 premises in the North have had their electricity restored.

Several Dart services have been cancelled or altered due operational issues. All other Irish Rail services are operating but with delays ranging from 15 to 40 minutes as a result of low rail adhesion from leafs on the line.

Aer Lingus have cancelled four flights out of Dublin Airport which were due to leave later on Friday. A Ryanair flight to Shannon Airport was diverted to Dublin on Friday morning.

The National Emergency Co-ordination Group has warned the public to stay away from coastal areas until the lifting of a Status Orange weather warning.

Updated DART alterations for this evening:

1735 Bray to Howth will start from Killester
19.00 Howth to Greystones will terminate at Connolly
2034 Greystones to Malahide Cancelled
2215 Malahide to Bray Cancelled https://t.co/e3CJgbK6WH

“The strongest winds will be all around the coast of Ireland but with a particular emphasis on Atlantic coastal counties and there will be rain accompanying it too,” Met Éireann meteorologist Siobhán Ryan said on Thursday night.

In Galway City a temporary 80m “aquadam” was installed at the Spanish Arch on the river Corrib estuary, while flood gates were installed at Toft carpark in Salthill. There is concern about the impact of the high tide in this city at around 8am.

The Road Safety Authority has asked road users to exercise caution with debris on many roads this morning.

The Coast Guard warned people to stay away from exposed beaches, cliffs and piers, harbour walls and promenades.

Met Éireann said the storm conditions should abate fairly quickly on Friday afternoon with drier weather developing for a time.

Another spell of very heavy, possibly thundery rain will push northwards later on Friday, and rain will be widespread on Friday night and for a time on Saturday but turning drier and fresher later in the day and overnight.

Over 9,000 homes and businesses were without power in Cork this morning as the full impact of Storm Callum is felt.

Aidan Weir, Senior Engineer with Cork County Council, says it is difficult at this early stage to surmise the situation because the high winds are still ongoing.

“We haven’t reached high tide levels yet along our southern coasts. We have had a busy night with our call out crews. We have had twenty five call outs most related to fallen trees. We have had an issue on the road in to Cobh where the road is partially closed due to a mud slide. An excavator is on the way to the scene and we expect the road to be fully reopened in the next hour or so.”

The worst impacted areas in Cork in relation to power include Skibbereen, Ballydehob, Castletownbere, Macroom, Kinsale and Mitchelstown.

Flights at Cork Airport are operating to schedule with no delays. Passengers are advised to check status of their flight before going to the airport.

Schools and businesses are being advised to keep up to date on decisions around road closures. Ballick Road in Midleton is currently impassable due to flooding.

High tide in Galway city passed without major incident this morning as Storm Callum tracked northwards over the western seaboard.

The high spring tide at 7.47am caused some spot flooding of the river Corrib at Spanish Arch, and there was also some minor overtopping in Salthill.

However, Galway City Council acting director of services Gary McMahon said the temporary dam or “aquadam” at Spanish Arch worked well, and the local authority plans to re-open roads that had closed last night as a precaution.

Roads re-opening this morning are Lough Atalia from the junction with College road to the Galway city docks; Eyre Square’s south side from the east towards the docks; Queen Street and Victoria Place and Dock road; the inbound slip lane at the G Hotel on the Dublin road; Salthill and associated roads, including Salthill Promenade, from the entrance to Mutton island to Threadneedle road; and Silver Strand.

Some city schools had closed in Galway due to the forecast, and traffic is reported to be lighter than normal into the city this morning. However, the orange weather warning remains in place for five western and north-western counties until 5pm, and motorists are advised to exercise caution if making journeys, particularly along exposed coastal areas.

In Mayo, some 600 homes are without power in the Ardnaree area of Ballina, and there are diversions in place due to fallen trees.

Roads affected by tree falls are Turlough road out of Castlebar, on the N58 between Foxford and Castlebar near Ballylahan bridge, in Lacken at the turnoff to Kilcummin, on the Kilmaine to Ballinrobe road.

1 Six weeks of Level 5: Non-essential shops to close, no visitors to homes and a 5km travel limit
2 Life under Level 5: What will the next six weeks look like for the State?
3 Level 5 latest: Gardaí to be given new powers to fine people for holding house parties
4 Covid-19: State moves to Level 5 for six weeks with hopes of ‘meaningful’ Christmas celebrations
5 Cork city centre is hit by flooding as River Lee bursts its banks
Real news has value SUBSCRIBE