Crayfish plague: no wonder the Irish species is white-clawed 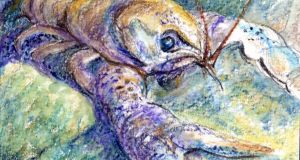 In the season of moulds, mildews and fungi, spare some dread for an organism, a protist, that shares its biology with potato blight and grapevine disease. Needing only living spores to invade the lakes and rivers of Ireland, it has killed whole populations of the white-clawed crayfish, an essential, keystone species, and now threatens its final extinction.

The organism, Aphanomycetes astaci, is grouped with diatoms and algae, but its swimming spores are chemically attracted to crayfish. They latch on and invade its shell, sending out interior filaments like a fungus. One infected animal releases zoospores to attack other crayfish and a whole colony of hundreds will die, usually within weeks.

The latest outbreak of crayfish plague, in Northern Ireland’s Bann system, brings outbreaks to half a dozen or more, stretching from the Erne to the Boyne, Barrow and Suir and the Deel and Lorrha tributaries of the Shannon.

They have been “closing a ring of disease around Ireland’s best populations”, according to ecologist Dr Julian Reynolds of Trinity College Dublin, the Irish authority on the subject. Half the limestone lakes in which crayfish once flourished have now lost them; mass deaths this summer in Co Westmeath’s Lough Owel have probably added another.

Ireland thus offers a last – and probably ill-fated – chance to protect a crayfish species once widely native in Europe. Austropotamobius pallipes was brought to this island, Dr Reynolds believes, by French Cistercian monks as food for the abbeys (genetic analysis supports the idea).

In 10 centuries of living in Ireland’s limy waterways, the island’s only crayfish has become a staple part of the freshwater ecosystem, providing food for otters and eels, eating water snails, insect larvae and crustaceans, and grazing the stoneworts of limy lakes.

Other than monks and Normans, however, the native Irish seem not to have found a taste for the animal’s meat – unlike the Swedes, for example, who hold big, traditional crayfish parties in August.

It was Sweden, unfortunately, that imported a self-immune carrier of the plague, the American, red-clawed signal crayfish, Pacifastacus leniusculus. Brought in during the 1960s to supplement declining populations of Sweden’s native noble crayfish, it has come near to wiping them out and replacing them.

As a bigger, meatier commercial species and colourful pet for home aquariums, it also spread to Britain in the 1970s, where it has exterminated the native white-clawed crayfish from a great many English and Welsh catchments.

In Spain and Portugal too, plague has spread from alien crayfish imports to leave A pallipes at risk of extinction. At last year’s big crayfish conference in Finland, ecologists from all over Europe reported similar anxieties.

Signal crayfish and three other kinds feature in the latest European Commission list of “Invasive Alien Species of European Concern”. And while the actual presence of the red-clawed invader has yet to be reported in Ireland, the malign and spreading impact of its mobile spores agitates the National Parks and Wildlife Service and the National Biodiversity Centre.

A dramatic NPWS leaflet on the subject (search “crayfish” at npws.ie) makes clear that the introduction of plague spores has come chiefly with anglers who carry them on their boats, gear or boots, either from outside Ireland or from an infected waterway to a clean one. The National Biodiversity Centre links to the latest reports and pictures the dangerous aliens in question (along with the signal, the red swamp crayfish, the marbled and the Turkish).

However, Dr Reynolds questions the strength of official concern. Emergency containment measures banning movement of boats from plague-affected waters were, as he notes, lifted last March in time for boating and angling, in apparent priority for the sports tourist industry. And recommendations against transmitting plague are, he suggests, rarely monitored or enforced.

As the pike and coarse angling season gets under way, these urgings can ask much of the conscientious fisherman. The Inland Fisheries Ireland website (fisheriesireland.ie) spells out the care to be taken in leaving an infected river such as the Barrow:

“Anyone using the river is being urged to observe the Check, Clean and Dry protocol. All wet gear should be checked for any silt or mud, plant material or animals. It then should be cleaned and finally dried. Disinfectant or hot water (over 60 degrees) should be used to clean all equipment followed by a 24-hour drying period should be adopted as standard practice in all freshwaters.

“Drying is especially important, including removing of any water from inside a boat and disposing of it on grass. A drying period of at least 24 hours is needed to ensure that a boat is clear of infectious organism.”

Dr Reynolds was once lobbied by farmers seeking to introduce the signal crayfish in Co Louth. Authorities north and south have both forbidden importation. But how long before Ireland’s only freshwater lobster is one that waves from the shadows under the banks with red patches beneath its claws?