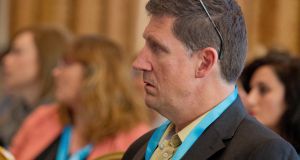 Green Party leader Eamon Ryan said there were ‘big questions’ to answer in relation to where the broadband plan goes from here. File photograph: Tom Honan.

The resignation of Minister for Communications Denis Naughten following controversy over the National Broadband Plan has added “further uncertainty” to an “already ailing and overdue process”, the industry has said.

Mr Naughten resigned from the Government on Thursday after Taoiseach Leo Varadkar told him to consider his position following admissions he attended four private dinners with the key bidder in the broadband procurement process.

Alto, the umbrella group representing 10 new entrant telecoms operators, expressed surprise at the sudden resignation of the Mr Naughten when contacted by The Irish Times on Thursday.

“Minister Naughten’s resignation adds further uncertainty to what is already an ailing and overdue process,” said chairman Ronan Lupton. “This development does little to secure the enabled information society that rural Ireland so desperately requires.

“We await the findings of the independent National Broadband Plan process review that has been directed today by An Taoiseach before making any further comment.”

Taoiseach Leo Varadkar has sought a report from Peter Smyth, the independent process auditor for the National Broadband Programme, in order to assess “whether or not the process has been compromised”.

Mr Varadkar said his “overriding concern” was the delivery of broadband to the 540,000 homes, housing over one million people, “who have been waiting for it for far too long”.

“It will be the biggest investment in rural Ireland ever and I believe it will be as significant as rural electrification was decades ago, allowing people in all parts of Ireland access public services online and trade in the digital economy,” he said.

Macra na Feirme, a rural youth organisation, said the developments could not be allowed to further delay the rollout of the scheme.

“The roll-out of high-speed broadband is absolutely crucial to keeping employment in rural areas,” said national president James Healy. “This employment will be key to providing our young people with the opportunity to remain in the communities they grew up in.

“The process so far seems ridiculously long and today’s event cannot cause any further delays in the roll out of what will be one of the most important pieces of infrastructure Ireland has seen since rural electrification.”

Green Party leader Eamon Ryan said there were “big questions” to answer in relation to where the broadband plan goes from here.

“The series of revelations today leave us in no doubt that his position had become untenable,” he said.

“This was not just optics. I’d also be very interested to know what the department knew throughout all of this. There are big questions to answer. Minister for State Pat Breen also has questions to answer now, given that he organised and attended one of the dinners.”

Mr Ryan also expressed doubt that the National Broadband Plan can be delivered in its current format.

“It is to be hoped that the new Minister will agree to meet the NUJ at an early stage and give full consideration to the NUJ proposal for the establishment of a commission on the future of the media in Ireland.

“The issue of media ownership and control is of fundamental importance. The influence of powerful players within the newspaper industry, in particular, on a number of aspects of Irish business is deserving of close scrutiny.”