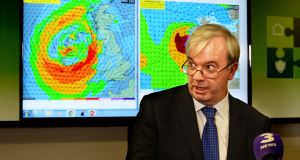 Storm Ophelia caused almost €70 million worth of damage after it tore across Ireland on October 16th last year.

The tropical revolving storm developed from the strongest eastern Atlantic storm in a century-and-a-half of records and brought wind speeds of 191 km/h to parts of Ireland.

It left more than 385,000 homes without power, tore the roofs off many buildings and effectively shut down the country for two days as the majority of workplaces closed shop during the red weather warning.

Ophelia also led to the deaths of three people in Ireland; Clare O’Neill (58) was killed when a tree struck her car in Co Waterford, Michael Pyke (31) was killed by a falling tree limb when he was using a chainsaw to clear a fallen tree in Co Tipperary and Fintan Goss (33) was killed when the car in which he was travelling in was struck by a tree in Co Louth. *

One year on, we look back at how much money was spent to repair the damage left in its wake and who is still left picking up the pieces from its aftermath.

The Department of Education allocated €898,000 for emergency repair funds while the ESB spent €15.6 million getting power back to houses and businesses across the country.

Insurance Ireland estimates the cost of insurance pay-outs due to Ophelia-related damage at €45 million, while local authorities spent just over €7 million on immediate damage repairs.

The Department of Transport spent €100,000 on repairs to the roof of the Red Cow Luas depot.

Those figures add up to €68.6 million - but has everyone who was affected been able to get back on their feet?

In January, Minister for Housing and Local Government Eoghan Murphy revealed the Government had given over €7 million to local authorities for immediate damage repair following Storm Ophelia.

The biggest portion of this money went to Co Cork, whose county and city councils received a combined €3,479,303.

This funding covered staff overtime and the hire of plant and contractors for immediate clean-up works, but did not cover any infrastructural damage - that would have to go through the relevant departments.

The Department of Education was left with one of the biggest bills, allocating €898,000 for emergency repair works to schools.

To date, the department has only spent €35,000 of this allocation, as it awaits the completion of a tendering process for the repair works.

The largest project approved for funding is Douglas Community School in Cork, where the roof of its sports hall was ripped off during the storm.

It was reported in February that the school had secured approval from the Department to spend €550,000 on the repair works.

Efforts to contact the school to find out what stage the works were at were unsuccessful, however the Department said “the school authority in Douglas Community School has completed the design and specification stages of the project and is currently advancing the tender process”.

Meanwhile, the ESB spent €15.6 million restoring power to 385,000 homes and replacing poles, transformers and cables which had been ripped up by the 190km/h winds.

“The effort saw the replacement of 3,000 poles, 500 transformers and 700km of conductor cable – enough to stretch from Malin Head to Mizen Head,” the ESB said in a statement.

Customers will see that their bills have risen this year after the ESB was given permission to recover their losses as part of the 2018/19 tariff.

In comparison to other severe weather events over the last 10 years, figures from Insurance Ireland show that Hurricane Ophelia was on the lower end of the scale in terms of insured losses.

More recent weather events, such as the flooding caused by Storm Desmond and Storm Frank in December 2015 and January 2016, caused €70 million in insured losses.

That said, the €45 million of insured losses caused by Storm Ophelia last year is the biggest figure seen since 2015.

Turners Cross stadium in Cork city was one of many buildings to have suffered severe structural damage during the storm.

Ophelia ripped half the roof off the Derrynane Road stand of the stadium and caused the remaining half of the roof to collapse.

The stadium, which is owned by the Munster Football Association, reopened in March 2018 after €160,000 was spent repairing the damage.

Gerard Delaney, the administrator for the Munster Football Association, said they received insurance money as well as a grant through the FAI and Uefa to cover the repair works.