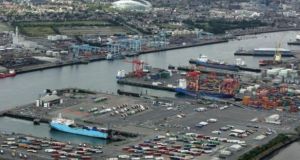 Royal Institute of the Architects of Ireland president David Browne said moving the port outside Dublin would present a “golden opportunity” for the development of the city. Photograph: Frank Miller

Suggestions by Royal Institute of the Architects of Ireland (RIAI) president David Browne that Dublin Port should move out of the city to free up housing land are “reckless” and “damaging to the credibility” of architects, Dublin Port Company chief executive Eamonn O’Reilly has said.

Mr O’Reilly has written to Mr Browne in response to his address to the RIAI annual conference last Friday where Mr Browne said the industrial port would eventually “have to move” from Dublin city.

Speaking at the opening of the event, Mr Browne said moving the port outside Dublin would present a “golden opportunity” for the development of the city.

“This year, the last sites in the Dublin docklands are being sold,” Mr Browne said. “At some stage, the port of Dublin will have to move. The relocation of the port is a golden opportunity to create a modern high-density city within the city. If this is to occur, it is of great importance to start the relocation process now if relocation is to be completed by 2050.”

Mr O’Reilly has castigated Mr Browne, branding the suggestion as “mischievous” having “potential great expense for the exchequer” and lacking “analytical rigour”.

A 2009 National Development Plan study focusing on Dublin Port had recommended that nothing should be done to block either the proposed expansion of Dublin Port or the proposed development of a port at Bremore near Balbriggan in north Co Dublin, Mr O’Reilly said.

“Since 2009, we have continued to expand the capacity of Dublin Port and (for very good reasons) nothing whatsoever has happened to progress with the development of new port facilities at Bremore.”

That report had been commissioned by the Department of Transport in response to an “entirely daft” plan by the Progressive Democrats to move the port from Dublin, Mr O’Reilly said.

“You are not the first person to suggest this and probably not the last,” he told Mr Browne. “Given your position as president of the RIAI council, I am disappointed that that you would choose the RIAI conference to put forward the viewpoint that Dublin Port should be moved.”

Unless Mr Browne had a sound assessment of the costs and benefits of moving the port, Mr O’Reilly said he considered the suggestion “mischievous and reckless”.

“Coming from you in your position as president of the representative body of an important profession it carries unwarranted weight.”

The port company had been a supporter of Irish architects, Mr O’Reilly said.

“In a year when Irish architecture was so wonderfully represented by Yvonne Farrell and Shelley McNamara’s curation of the Venice Architecture Biennale, I also consider your remarks as damaging to the credibility of your profession.”

Mr Browne has said the port lands offered an opportunity for the new Land Development Agency to deliver housing at scale.