Climate change targets are merely aspirational for too many 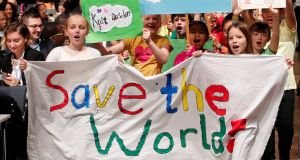 Children are seen during climate march prior to the opening session of the COP23 UN Climate Change Conference 2017. Photograph: Wolfgang Rattay/File Photo/Reuters

Parties to the 2015 Paris Agreement on climate change, including Ireland, have committed to reaching “net zero emissions” of CO2 by 2050. That is the big global target.

In spite of the evidence of rising carbon emissions and their impact on the Planet, progress towards that target is nowhere near where it should be. For too many across the world, it is somehow aspirational – to be achieved sometime in the distant future.

The latest report from the UN Intergovernmental Panel on Climate Change (IPCC) report starkly dispels any notion of achieving that target based on current “business as usual” economies and modern lifestyles.

What is more, it confirms global warming is accelerating. We have already reached 1.1 degrees and the consequences of a warming world are glaringly evident: more frequent extreme weather events; water and food shortages, rising sea levels, wild fires, accelerating extinction of plants and animals and dramatically reduced biodiversity; all attributable to climate change.

Not only that, they conclude what happens between now and 2030 matters, if there is to be any chance of achieving that mid-century target. There is only a dozen years for global warming to be kept to a maximum of 1.5 degrees, beyond which even half a degree will significantly worsen the risks of drought, floods, extreme heat and poverty for hundreds of millions of people.

Limiting temperature increase to 1.5 degrees above pre-industrial levels is possible within the laws of chemistry and physics, and remarkably, the report underlines reducing emissions significantly, lessening the worst impacts in the form of climate change and restoring ecosystems are realisable.

But it would require rapid, far-reaching and unprecedented changes at all levels of society, according to leading climatologists attached to the IPCC.

Contrary to speculation that it findings would be watered down once government delegates gathered to ratify it in South Korea, if anything its findings are more stark compared to earlier drafts. Maybe this is cause for some hope in the face of findings that confirm it is this generation that has to intervene if there is to be any chance of beginning to address climate change this century.

Critically, the science has never been clearer and this report will inform global climate change policy for the next decade. So far, most governments have shown little appetite for the scale of changes needed and continue to rely on the use of fossil fuels to sustain their economies.

In Ireland’s case, it stands out as a wealthy country failing to achieve reductions in carbon emissions and to adopt renewable energy sufficiently – in contrast to the majority of EU member states.

Going for 1.5 degrees requires much more effort. Investments in energy production, greener industrial processes, decarbonising transport, transforming the building industry and changing farming practices are needed to deliver that unprecedented scale of change across a menu of options; all of which are laid out by IPCC scientists.

What is more, the risks are considerable higher at 2 degrees than 1.5 degrees – and yet the world is currently on a 3-degree trajectory by the end of the century. The “1.5 degrees” report confirms suspicions raised in Paris; that 1.5 degrees limit is necessary to protect the most vulnerable.

Many environmental NGOs have called for stronger political commitments and more ambitious climate targets by 2020 in light of the findings. EU environment ministers meeting this week will be under pressure to deliver a strong response. The European Commission’s new proposal for 30 per cent CO2 cuts from new cars and trucks by 2030 falls drastically short of ambition demanded by the IPCC and is already under fire.

The first test for the Government comes with Tuesday’s Budget. If it backs off an anticipated increase in carbon tax, it will signal “business as usual” matters most for the time being, though catastrophic climate change is at our doorstep.