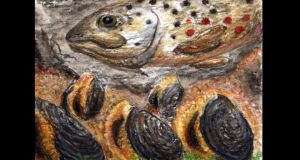 It seems a bit late in the day, if not the whole Anthropocene, for humans to think of giving half the Earth back to nature. In America that project is led by the admirable EO Wilson, Yale University’s David Attenborough. His “Half-Earth” team is mapping the planet’s hot-spots of biodiversity to link them together in a grand conservation plan.

On this side of the Atlantic, the new EU Biodiversity Strategy for 2030, key pillar of the European Green Deal is far more modest but still highly ambitious. Building on existing Natura conservation zones and connecting them with ecological corridors, it will transform at least 30 per cent of Europe’s lands into a network of actively managed and protected areas. Those with peak biodiversity will have the toughest controls.

Catching up on decades of missed deadlines and slack national effort, not least in Ireland, an EU “nature restoration plan” will be backed by binding legal targets for repairing degraded and carbon-rich ecosystems, such as peatland. At least 10 per cent of farmland will be devoted to “high diversity landscape features” such as hedgerows, stone walls and flowery headlands, and at least 25 per cent will switch to organic farming.

Along with a 20 per cent reduction in fertiliser use, the new EU Farm to Fork plan aims to cut fertiliser run-off and waste by half

All this, plus planting three billion trees, restoring 25,000km of rivers and cutting the use of pesticides by 50 per cent, is linked to the EU Farm to Fork Strategy. This will help shape the Common Agricultural Policy (CAP) and guide farm payments under eco-schemes. National targets for legally binding “restoration” will be proposed next year.

Ireland’s conservation areas total 14 per cent of the land, well short of the 18 per cent European average. At the head of the list are Slovenia and Bulgaria, already conserving more than 30 per cent.

Management and restoration of the new Natura network will require an annual investment of €6 billion, promising up to 500,000 new jobs to help in the rebound from Covid-19. Already, says the European Commission, more than a million farming jobs are linked to conservation. Bord na Móna’s restoration of the midland bogs, just announced, will cost €108 million and create some 350 jobs – a timely example, if rather special to Ireland.

Teagasc scientists agree that the EU biodiversity plan will demand “transformative change” in farming. In its current research journal, John Finn and Daire Ó hUallacháin see it as “bringing nature back to agricultural land”.

Some measures echo Teagasc’s own efforts to wean farmers away from routine spraying with pesticides. More than a million kilos, nearly all herbicides and fungicides, are still applied to arable crops and half as much again to grassland and fodder crops in Ireland. Last year Teagasc joined a major European research alliance to find and test organic alternatives.

The new drive to clean up polluted rivers, lakes and drinking water has special importance for Ireland. Along with a 20 per cent reduction in fertiliser use, the new EU Farm to Fork plan aims to cut fertiliser run-off and waste by half. Basic farm payments will also make farmers responsible for protecting wetlands and ponds on their land.

Some 7,000 intensive Irish farmers take part in “derogation” from the EU’s Nitrogen Directive, which limits the amount of cattle slurry they can spread on their land. Under Ireland’s “Food Wise” plans, numbers of dairy farmers will increase, along with their slurry-spread hectares.

Some atonement may come from the recommended growth of more flowering plants for pollinators.

A new report on the state of the Irish environment by the Environment Protection Agency discusses degradation of soils, given the new floods and droughts of climate change. It points up the damage to carbon storage and recycling of nutrients – work carried out by the fungi, bacteria and insects that live in the soil and amazingly account for about a quarter of all living species.

Apart from pollinators, lively, brightly coloured and obviously of human value, insects and other invertebrates rate little conservation investment. This matches the interest in charismatic mammals that make good wildlife films, but the mismatch of money for creatures with backbones compared with those without them is drawing growing reproach from many ecologists.

Ireland’s star conservation invertebrate is the freshwater pearl mussel, just about surviving in some clear moorland rivers of the west. Now rare in Europe, it is a badge of water quality that merits much attention, not least on 13 pages of the new EPA report. For farmers along its riverbanks, it also earns payments for protecting the natural value of their land.