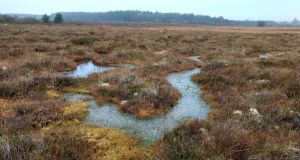 Visit the Living Bog project in the midlands and you will see, not a dank brown landscape, but a vibrant “tapestry” of colour teeming with life.

“Without realising it, the secret weapon against climate change was right under our feet,” he says.

“For far too long we effectively allowed our bogs to disappear for short-term gain [of peat extraction].”

He was speaking after the Government’s announcement on Tuesday of €108 million in funding for peatland conservation.

The funding is for Bord na Móna’s large-scale restoration project in the midlands, with ambitions to protect the storage of 100 million tonnes of carbon, enhance biodiversity and create 350 jobs, many among former peat harvesters with “an intimate knowledge and long history of working on our bogs”.

Investment from the Climate Action Fund will be bolstered by a further €18 million from Bord na Móna.

Casey believes lessons can be learnt from the Living Bog project, which has installed almost 10,000 peat dams essential to “rewetting” the land under a €5.4 million investment jointly funded by the State and the EU.

“Even in a short period of time the results we have seen have blown the most hardened and seasoned ecologists away,” says Casey.

In climate terms, the idea of peatland conservation is very simple: about two-thirds of Ireland’s carbon stock is contained in it. There is a long way to go, however: 200 years ago there were about 310,000 hectares of active raised bog in the midlands, reduced to about 1,700 today.

Minister for the Environment and Green Party leader Eamon Ryan described the Bord na Móna project as a major milestone and an opportunity to capture millions of tonnes of carbon over the coming years.

“Bog rehabilitation and remediation is a wonderful example of ‘Just Transition’ in action, where workers who previously harvested peat for power generation will now be the custodians of our bogs,” he said.

However, Oisín Coghlan, director of the Friends of the Earth environmental group, cited a lack of detail in the plan.

“It will be essential that the project draws on expertise beyond Bord na Móna to ensure we get the best possible outcomes for nature and climate,” he said.

The Irish Creamery Milk Suppliers Association (ICMSA) said the concerns of landowners must be addressed alongside climate change.

“Bord na Móna will have to provide clear assurances that privately owned farmland adjacent to the Bord na Móna sites will not be flooded or waterlogged as part of the projected rewetting of the 80,000 acres,” it said.

In addition to the €108 million in State funding, €28 million will be spent on a range of “Just Transition” initiatives in communities which were economically dependent on peat harvesting.

Some 47 projects spread across the midlands will share the grants, including allocations for a carbon challenge feasibility study in Edenderry, Co Offaly, and a digital learning hub based in Longford.