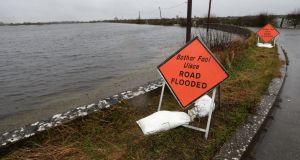 Heavy rain in parts of Ireland on Monday night into Tuesday morning may lead to flooding, Met Éireann has warned.

The forecaster issued a status yellow rainfall warning on Sunday for Connacht, Donegal, Clare and Kerry that came into effect from 2pm on Monday and is due to expire ato 2pm on Tuesday. Met Éireann said that heavy rain in the affected regions during the period in question could lead to river and localised flooding.

Rain was forecast to develop in the west and northwest through Monday morning before spreading across much of Connacht and Ulster, becoming persistent and heavy at times.

Monday night will see persistent or heavy rain affect much of Ulster, Connacht and west Munster, with lowest temperatures of between 5 and 9 degrees.

Heavy rain will persist over the western half of the country on Tuesday, which will be a mostly cloudy day. Met Éireann said this rain will bring a risk of localised flooding. The rain in the west is forecast to extend eastwards throughout the afternoon and evening on Tuesday before eventually clearing. Highest temperatures during the day will be between 10 and 12 degrees.

Tuesday night will once again be cold and mainly dry.