‘We need a decade of action in the 2020s,’ Environmental Protection Agency warns 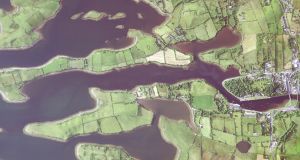 “Now, more than ever, Ireland’s green and blue spaces, which include urban parks, coasts, lakes, rivers, forest and bogs, are essential components of our health infrastructure.” An aerial photograph of Clew Bay in Co Mayo taken by Ordnance Survey Ireland

The latest assessment of the state of the Irish environment shows a litany of planning and enforcement failures are putting nature and wild places “under unprecedented pressure”.

The Environmental Protection Agency (EPA) says in a report, Ireland’s Environment: An Integrated Assessment 2020, that pressure points are arising across many sectors.

This is reflected in a “very poor” current assessment on addressing high carbon emissions as well as other indicators such as a levelling-off in recycling rates for both municipal waste and packaging and the fact that just over 50 per cent of surface water is in “a satisfactory ecological condition”.

All too often action is being pursued in isolation, a problem compounded by lack of implementation of policy and enforcement of regulations already in place, the EPA concludes.

The degradation cuts “across different environmental topics such as climate, air, soil, water, biodiversity and waste – and across organisations and sectors, business and all levels of society”.

This is impairing the ability to get the country back on track quickly, the EPA says, “enduring and systemic challenges are putting pressure on the environment and remain to be solved”.

The report which is compiled every four years warns failures on climate action, environment and air pollution will increasingly have a detrimental impact on people’s health.

– 90 per cent of Irish energy continues to be generated from fossil fuels, giving rise to greenhouse gases when the country has committed to reducing carbon emissions;

– Air quality in some urban areas does not meet World Health Organisation standards and more than three people die a day from the resulting pollution;

– Continuing damage to nature and habitats means 85 per cent of EU-listed habitats of international importance are in unfavourable condition;

– Many wetland bird species are under threat of extinction;

– Raw sewage is being discharged to water from 35 towns and villages;

– Nutrient concentrations in rivers and nutrient inputs to the marine environment are increasing, due to agriculture and poorly-treated sewage;

– More than one million tonnes of food waste is generated each year, generating a high level of carbon emissions;

The report acknowledges pockets of local success such as the Living Bog Project, which is in the process of restoring bogland in the Midlands, equivalent to 7,000 Croke Parks, and generation of green spaces, but these are inconsistent across the country.

EPA director general Laura Burke said environmental issues and challenges cannot be looked at in isolation, as they are complex, interconnected and need to be tackled in an integrated way.

“Now is the time for an overarching environmental policy position for Ireland – to be clear on our ambition to protect Ireland’s environment in the short, medium and long term and on our commitment to live up to the image of a clean, green island,” she added.

“We need to see a decade of action in the 2020s. A policy position would provide a national vision all government departments, agencies, businesses, communities and individuals can sign up to, to play their part in protecting our environment.”

If many plans and programmes in place were fully implemented, it would go a long way towards resolving persistent environmental issues, the EPA concludes. “Full implementation of, and compliance with, legislation is a must.”

On rising emissions, the report warns, “the longer we delay, the more difficult it will become to turn things around to meet our obligations. [But] it is more than meeting targets, the real goal for Ireland in the face of climate disruption is to have a resilient and stable society and economy, one that is carbon-neutral through its own efforts and natural attributes.”

Nature and wild places need to be better safeguarded, both locally and in protected areas.

In a stark message, director of the EPA office of environmental assessment Dr Micheál Lehane said: “Ireland is already losing much of what is important in its environment. Unspoilt areas are being squeezed out and we are losing our pristine waters and the habitats that provide vital spaces for biodiversity.”

“Now, more than ever, Ireland’s green and blue spaces, which include urban parks, coasts, lakes, rivers, forest and bogs, are essential components of our health infrastructure. These allow people to get out in nature and away from everyday stresses, to the benefit of health and wellbeing and they need to be clean and protected. An investment in the environment is also an investment in our health,” he said.

The report calls for a review on “how we manage and recycle our waste”. “Strong, consistent, multi-agency enforcement and campaigns to change public behaviour are needed to effectively target littering in urban and rural areas, to prevent waste crime and to ensure that those who break the law are held accountable.”

While waste recycling rates have stagnated or declined, “improved segregation of kerbside bins could bring about significant improvement in rates”.

Landfill and waste-to-energy treatment in Ireland is at capacity, it warns, and the country is highly dependent on export markets to treat residual, recyclable and hazardous wastes. “We need to build in resilience to Ireland’s waste management capacity in the event of emergencies.”

This may require new levies on incinerators and on waste exports to ensure more recycling is carried out. Environmental taxes have been successfully introduced on landfill use and plastic bags, but are at a low level compared to other countries, the report says.

It is available here