Stop sending pointless emails, the planet will thank you 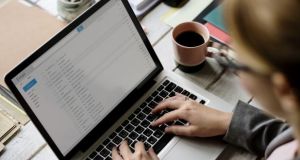 A study last year suggested that if each person in the UK sent one fewer email a day it could cut carbon output by more than 16,000 tonnes a year.

Millions of unnecessary emails sent every day, including those that say nothing more than “thanks” are a threat to the planet, scientists believe.

With the UN COP26 climate change summit taking place in Glasgow, Scotland next year, organisers are looking at innovative ways to cut carbon emissions — and the footprint left by web users has drawn its attention.

British officials have been particularly taken by research suggesting that, in the UK for example, more than 64 million unnecessary emails are sent every day, pumping thousands of tonnes of carbon into the atmosphere owing to the power they consume.

Multiply the figure out across the world and the affects are multiplied.

“We’ve been looking at research suggesting that if you reduced those emails by just one a day, you would save a lot of carbon,” said one person involved in COP26 preparations.

The issue of unnecessary emails was raised in a recent paper from the National Cyber Security Centre, a London-based agency charged with making the country’s online life secure. The centre declined to comment.

Cutting online small talk and courtesies has not yet been put to ministers — officials say work is at a preliminary stage — but British prime minister Boris Johnson wants to make radical environmental action a hallmark of his premiership.

It is important to recognise that data traffic — such as email — does have an energy and carbon penalty.

The carbon footprint of an email comes from the electricity that is used to power the devices on which it is written and read, the networks that transmit the data, and the data centres that store it.

Experts estimate data centres account for less than 0.1 per cent of the world’s carbon footprint, a small figure compared with the 20 per cent blamed on cars. However, emissions from data centres are growing because of increased use of online media such as video calls, games, and streaming.

One piece of open source information referred to by officials relates to research commissioned by Ovo Energy last November, which suggested that if each person in the UK sent one fewer email a day it could cut carbon output by more than 16,000 tonnes a year.

The research claimed that would be the equivalent of more than 80,000 people flying from London to Madrid. It found that the 10 most “unnecessary” emails included messages saying only “thank you”, “appreciated”, “cheers” and “LOL”.

“It is important to recognise that data traffic — such as email — does have an energy and carbon penalty,” said Susanne Baker, associate director for climate, environment and sustainability at TechUK, a non-profit industry group.

However, she emphasised that the technology sector had invested heavily in increasing its use of renewable energy instead of fossil fuels, and said that some industry forecasts modelled a 50 per cent reduction in carbon by 2030.

Other experts view the idea of an email crackdown with caution.

Mike Berners-Lee, a professor at Lancaster University whose research was used to estimate the impact of cutting back on emails, said the estimated impact of each email was based on “back of the envelope” calculations in work from 2010, and that it was only a small part of emissions related to the tech sector.

While he said it was useful as a hook for broader conversations on climate change, Mr Berners-Lee said it was vital to keep the emphasis on more significant IT questions over whether the sector can contribute to a low carbon world.

“The idea that [greater] efficiency automatically brings about a cut in carbon... looks incredibly dubious,” he said. “The [efficiency] of information storage and transmission and analysis has gone up by a factor of millions, but... the carbon footprint of our information storage and transmission analysis has also gone up because we’re doing millions and millions of times more of that activity.”

However, IT has proved its benefits in the Covid-19 crisis at a time when an economic slowdown has limited carbon emissions from other sectors, he said. “It’s great to see under those conditions that IT has enabled us to live better than we’d be able to live, without increasing our carbon footprint,” he said. – Copyright The Financial Times Limited 2020