Heat from beneath Earth’s surface could be used in buildings, while decarbonising heat sector 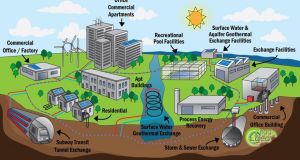 How geothermal energy can be deployed. Illustration: Sarah Cheney/National Geographic

Harnessing natural energy from beneath the Earth’s surface presents a significant new heat source for Ireland, and is suitable for use in residential, commercial and municipal buildings, two reports compiled for the Government conclude.

New developments in geoscience and technological advances mean geothermal energy is no longer limited to volcanic areas of the world, according to reports from the Department of the Environment, Climate and Communications (DECC) and Geological Survey Ireland (GSI).

The heat is derived beneath the surface of the Earth; water and/or steam carry this energy to the Earth’s surface so it can be used for heating and cooling purposes – or harnessed to generate clean electricity. Geothermal is a secure, environmentally sustainable and cost-effective source of renewable energy, the reports underline.

In Ireland’s case it can be used to heat a wide variety of buildings, while at the same time decarbonise the heat sector, which is responsible for more than one-third of the country’s energy consumption.

Along with individual home and commercial geothermal systems, geothermal district heating networks can be used to heat and cool residential, industrial and municipal buildings in urban areas.

The best heat sources are likely to be near the east coast; the south coast and much of the western seaboard – while most of Northern Ireland has particularly strong potential.

The Assessment of Geothermal Resources for District Heating and Roadmap for a Policy and Regulatory Framework for Geothermal Energy in Ireland were developed to support the Government’s commitments under the 2019 climate action plan and the programme for government.

The former summarises recent technological developments, including improved understanding of “Earth systems”, which have facilitated growth in the geothermal energy sector globally, while the latter sets out steps to develop geothermal energy in Ireland.

Addressing the Geoscience 2020 conference, Minister for the Environment Éamon Ryan said it was great to see new developments in geothermal energy that could help decarbonise Ireland’s heat sector. “We are already seeing exciting projects like the ESB head office and the Lahinch leisure centre leading the way [in deploying geothermal energy].”

Ireland could learn from European colleagues, and with expertise from the GSI and their partners, develop “these exciting opportunities that can complement other renewable technologies such as wind and solar”.

Development of the energy source, including research and policy supporting it, would be a priority for his department in coming years, he said. It has begun a consultation process and is accepting submissions – notably via the email geothermal@decc.gov.ie