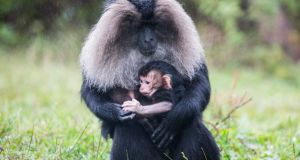 Staff at Fota Wildlife Park in Co Cork are attempting to establish if a new-born lion-tailed macaque, the first arrival at the park for four years, is male or female. Photograph: Darragh Kane

Staff at Fota Wildlife Park in Co Cork are attempting to establish if a new-born lion-tailed macaque is male or female.

The issue has arisen as rangers have been unable to get close to the infant as its parents Tish (11) and Mauzer (seven), as well as other members of the troop, have been keeping a close guard since the baby was born on July 23rd. It is the first lion-tailed macaque to be born at the park for four years.

The lion-tailed macaque is one of the most endangered of the Asian primate species and has been a fixture at Fota since arriving from Dublin Zoo in 1986.

Since the species first bred there in 1988, a number of Fota-born macaques have been sent to zoos worldwide as part of the European Endangered Species Programmes (EEP).

“The lion-tailed macaque breeding group at Fota is considered one of the most successful in Europe with over 40 born here so far,” Fota’s lead ranger Teresa Power said. “This troop is of critical importance to the international breeding programmes given how rare the species are becoming in the wild.”

The lion-tailed macaque is indigenous to the Western Ghats area of southern India but have long been hunted for meat and fur, with the population of the primate in the wild there now at about 3,500. About 600 of the primates are living in captivity globally.

Fota Wildlife Park is asking members of the public to help name the new baby and suggestions can be made on the park’s website.