‘Brazen’ dumpers leave up to 400 tyres next to motorway 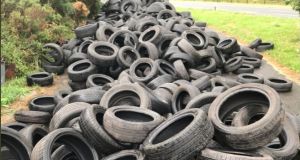 Some of the tyres found at a disused customs weighbridge between Carrickarnon and Ravensdale junctions. Photograph: Cllr Antóin Watters

A cross-Border clampdown on “brazen” illegal dumpers has been urged after hundreds of used tyres were discarded next to the motorway between Dublin and Belfast.

Up to 400 tyres were discovered on Saturday morning at a disused customs weighbridge off the southbound lane of one of the country’s busiest roads, between Carrickarnon and Ravensdale junctions.

Antóin Watters, a Sinn Féin councillor on Louth County Council, suspects the load came from a “big operation” operating in the North.

“This has been going on for a while and it is not going away – it just getting worse,” he said.

“As to who is behind it, it is hard to know.

“But with the quantity of tyres dumped, it is a big operation. This is not a man with a car trailer. It is a big lorry dumping them – someone with the capability to carry 400 tyres.”

Mr Watters says authorities on both sides of the Border need to come together to tackle the increasingly audacious dumpers.

“This is on one of the busiest roads in Ireland, ” he said.

“It is not on a wee country lane anymore, they are becoming more brazen. And if they are brazen enough to do it there, they will do it anywhere.”

Mr Watters has asked gardaí to look at CCTV along the route to see if it will help identify the vehicle behind the latest in a series of illegal dumpings, including tyres and appliances, close to the Border.

More than 750,000 tyres have been dumped in sites around the country, according to local authorities estimates.

Disposal costs the taxpayer millions of euro every year.

Last year, a levy of up to €2.80 was introduced in the Republic to go towards the recycling of end-of-life car tyres.

Tyre industry groups opposed the move, saying the regulations would be unenforceable and would do nothing to stop people dumping tyres.