Severe flooding in North as month’s rain falls in afternoon 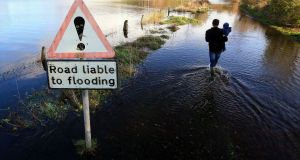 Emergency services are dealing with the impact of severe flooding in the North.

On Saturday some areas saw more than an entire month’s rain in one afternoon.

After a heatwave lasting weeks, heavy rain and thunderstorms caused the flooding of several roads and some public transport services were cancelled.

A number of older people had to leave their homes in the Co Antrim village of Muckamore due to flooding, and Antrim Castle Mall shopping complex in the county also had to be shut.

A main road from the M1 to Belfast International Airport was closed.

A statement from Stormont’s Executive Office said a multi-agency teleconference, chaired by local government, had been held to co-ordinate the response from departments, councils and utilities to the current difficult weather conditions.

All agencies were making preparations since earlier this week and were responding to numerous calls from across Northern Ireland, the statement said.

The public is being asked to take necessary precautions when travelling as there may be disruption on roads.

In the Republic, status yellow rainfall warnings were issued.

Downpours were expected to affect the whole of Leinster, counties Cavan, Monaghan, Donegal and Waterford.

The Road Safety Authority urged drivers to watch out for flash flooding and the risk of aquaplaning.