Harvestman spiders in Galway, a dragonfly in Leitrim and a stoat in Co Clare 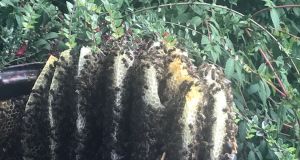 I opened my compost to find a beautifully constructed bees nest. We have many irises and wild flowers and see these bees and many of the larger bumblebees.
Dara Terry, Clontarf, Dublin 3

It took a while for a honey bee colony of that size to get established.

I took a photo of this spider lying flat on a beech leaf. It had very strange palps at the front.
Kate Bradshaw, Galway

It is the harvestman spider, Dicranopalpus ramosus, a recent arrival first recorded here in 1995.

This dragonfly landed in an empty bucket and seems to have brought or found some food there.
Kate Murtagh Sheridan, Co Leitrim

This flying insect, a little over an inch long, appeared on the wall of my house. I think it was a grasshopper. When I gingerly approached it hopped on to the lawn.
Eamon Flanagan, Rathfarnham, Dublin 16

It was the common field grasshopper, found all over the country in fields, lawns and woodland.

Two neighbours and I have hedgehogs in our garden. We assume they are three weeks old and now off on their own. We feed them with cat food and water.
Kay O’Flynn and Mary Cashman, Dungarvan, Co Waterford

This small animal entered my sister’s house in Ballyvaughan through the backdoor and made his way through the house until he found his way out the front door.
Theresa Veale, Dungarvan, Co Waterford

It was a stoat.

I saw a juvenile cuckoo sitting on a fencepost just outside our cottage. Eventually its meadow pipit parents came one at a time, landed on its back and fed it.
Simon Doran, Bofeenaun, Co Mayo