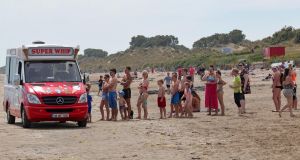 In a monthly weather report, the national forecaster said the recent period of warm and dry weather set several records.

On June 28th the forecaster recorded a temperature of 32 degrees at Shannon Airport station, the highest temperature recorded in June since 1976.

The reading of 32 degrees at Shannon Airport was also the highest for any month since July 2006, when 32.2 degrees was recorded at Elphin, Co Roscommon.

Malin Head, Co Donegal, got the most sunshine in a single day for June this year, with 16½ hours on June 28th, Met Éireann said.

Knock Airport station recorded 16 hours of sunshine on July 3rd, the highest amount recorded since the station opened in 1997.

All stations across the country had above average levels of daily sunshine for the month of June.

Johnstown Castle, Co Wexford, got the most sun, reporting 244 hours of sunshine over the entire month of June. The weather station also topped the chart in July, with 240 total hours of sunshine.

Oak Park weather station in Co Carlow notched up an 11-day heatwave in late June, the longest heatwave in the last 20 years.

Met Éireann defines a heatwave as when there are five consecutive days of temperatures in excess of 25 degrees. Official heatwaves were recorded at 15 weather stations this June. Prior to this summer, Met Éireann had only recorded six heatwaves at stations since 2000.

The longest heatwave in the last half-century was recorded at Birr station, Co Offaly, in August 1976. It lasted 14 days.

Met Éireann said that last month half as much rain fell in the east of the country as was normal for the region in July. Gurteen, Co Tipperary, only had 35 per cent of normal rainfall levels in July.

Phoenix Park in Dublin recorded its lowest rainfall total for the months of June and July since records began in 1850, at 34.5mm combined.

Rainfall in the west of the country was 80 per cent of normal levels in July.