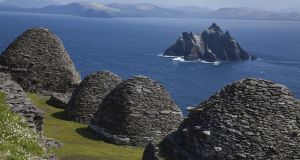 A heritage group has expressed concern about a “continuous rise” in the number of people visiting Skellig Michael, the 6th century monastic island off the Co Kerry coast.

The popularity of the Unesco World Heritage Site, considered one of the greatest remote scenes of early Christendom, has increased since it appeared in the Star Wars film series and due to the numbers using the Wild Atlantic Way tourism route. Skellig Michael is open to visitors between mid-May and September 30th.

However, the Office of Public Works (OPW) said the numbers fall “within the range of what is recognised as acceptable and sustainable”. It said the numbers were constantly monitored and reported to Unesco.

Skellig Michael cost the OPW €510,000 to run last year, but brought in no direct income for the State.

Licensed boat operators charge between €85 and €100 per person to bring visitors to the island, 11.5km off the coast.

Fifteen 12-seater boats serve the island under a permit system, which are tendered for annually. The OPW said no permit fees apply to the boat operators and it does not collect a fee from visitors.

1 Covid-19: State moves to Level 5 for six weeks with hopes of ‘meaningful’ Christmas celebrations
2 Life under Level 5: What will the next six weeks look like for Ireland?
3 Bill that overrides UK’s Brexit deal denounced in House of Lords
4 Covid-19: Policy reversal means State to enter Level 5 curbs for six weeks
5 High levels of microplastics in infant-feeding bottles released during formula preparation
Real news has value SUBSCRIBE