Eir willing to re-engage with broadband plan if model changed 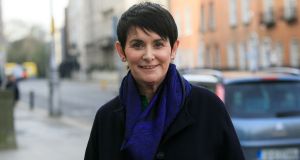 Eir chief executive Carolan Lennon said the firm is prepared to take part in a retendering process for the broadband plan.

Eir would be prepared to take part in a retendering process for the National Broadband Plan should the Government agree to change the current model, the company’s chief executive Carolan Lennon has said.

Ms Lennon, addressing the Oireachtas communications committee on Tuesday, said the company could complete the plan for less than €1 billion, just a third of the sum the State has agreed to invest in the project and a fifth of the estimated final cost.

In the Dáil, Taoiseach Leo Varadkar questioned these claims, saying Eir’s bid “would involve passing homes but not connecting any of them”, arguing a further connection cost would be required. He also said the bid did not cover maintenance costs for 25 years. “Therefore, it would be pretty useless to anyone.”

A consortium led by US businessman David McCourt is the only remaining bidder for the project after Eir and Siro withdrew from the process citing difficulties with the tender process and viability of the plans.

The McCourt consortium was give the green light by Cabinet last month, although a contract has yet to be signed. Some €800 million was initially allocated by the Government for the plan, but the cost to the State is now estimated at €3 billion.

Asked by committee members whether Eir would be willing to re-engage with the process, Ms Lennon said: “We certainly don’t want to re-enter in its current form because none of the things we pulled out for have changed.

“We pulled out because of the complexities of the plan, the cost of overheads and the risk to our business. As long as that process exists, we won’t be part of it.”

However, in the event the Government decided not to proceed with the McCourt bid and was willing to change the model, she said: “If there was a retender with a model that made sense to us, we would be involved. Of course we’d look at it.

“We’re a commercial company. We know how to do this. If there was another form where it was commercially sensible to do this, we would.”

Before it exited, Eir convinced the Government to remove 300,000 homes originally earmarked for the plan, undertaking to service them itself as part of its own commercial rollout.

Rejecting the Taoiseach’s comments, Ms Lennon said she was “certain” Eir could deliver the broadband plan, which would include connecting homes rather than simply “passing” them, for less than €1 billion if it were modelled on the same criteria as the 300,000 homes it has already serviced.

Ms Lennon said there would be a further cost of €900 million for maintenance and upgrading, but that this would be recovered from the revenue Eir would get through the plan rather than being billed to the State.

The committee also heard that before Eir pulled out more than a year ago, its then chief executive Richard Moat wrote to the then minister for communications Denis Naughten to say it could deliver the plan for a “fraction of the price”.

However, Ms Lennon said the company never heard back from Mr Naughten or the department.

“There was no further engagement with us,” she said. “We didn’t have very much engagement with the minister. I think we were disappointed with the engagement of the department because we were raising very valid issues.”