Is this a shark moth? Readers’ nature queries 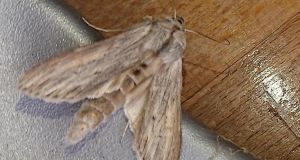 Is this a shark moth? - Frank Folan, Ballyvaughan, Co Clare
Yes, it is. The shark moth is found locally throughout Ireland but more plentiful in coastal areas, particularly in west Mayo, Galway and north Clare.

This insect was feeding on rhododendron, along with bumble bees. – Helen Bond, Claudy, Co Derry

I found this bird’s nest orchid in the forest on Binevenagh Mountain, Co Derry. It is unusual as it lacks chlorophyll and parasitises tree roots. –Michael Cross, Belfast
The roots of the bird’s nest orchid are heavily infected with a fungus through which it obtains its food from the soil or tree roots. It gets its name from the shape of its roots.

I spotted this moth early this month inside a window frame where it had laid eggs. – Brigitte Krenn, Laytown, Co Meath
It’s the buff ermine moth, which obviously got trapped inside and couldn’t get out to lay its eggs on the food plant.

I saw this dragonfly along the Royal Canal. Is it just one fly or two? The shape of its head end looks strange. – Brian Collins Raheny, Co Dublin
It’s the four-spotted chaser dragonfly, and that is its shape.

Pigeons chew the leaves of my lilac and sometimes fall asleep in the tree. When someone opens the door they fly in all directions sometimes hitting walls and windows. – Myles Reid, Deansgrange, Co Dublin

I came across this beauty on my road. Is it a white ragged robin? – Suzanne Lindfield, Cashel, Connemara
Yes, it’s uncommon but occurs now and again.