Trouble in Tyrone hills as gold mine splits local community

There have been more than 15,000 objections to a plan by a Canadian firm in the Sperrins 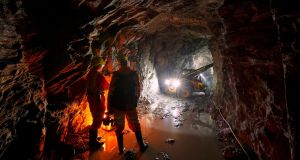 Sparkling walls: inside the Dalradian gold mine in Tyrone. Photograph: Paul Lindsay

In Greencastle, Co Tyrone, even wakes are split over the gold mine.

“Wakes would be a big thing around here,” says Kathleen Beggs, “and you’d nearly be watching who you sit beside. That’s how bad it’s got.”

“I’ve noticed that recently,” adds Sean Tracey. “The few that would come that are for the gold mine, they’d have their heads down and they wouldn’t look you in the eye.

“But then there’s also people who might never have spoken to you before who would be talking away to you because they know you’re against the mine.

“One of the guys in work said to me the other day, ‘I saw you in the paper about the gold mine. Thank you very much, I appreciate that, and keep up the good work’.”

The gold is in the hills around them. The first attempt at mining the gold was made in the 1980s; an old lift dating from the original exploration still remains in the tunnel, though plans had to be abandoned because of security implications around the use of explosives during the Troubles.

Canadian mining company Dalradian Gold has been working in the area since 2009, undertaking exploratory work and testing; in 2017 a planning application was lodged to build an underground mine and the associated surface developments, including a processing plant.

Greencastle is well off the beaten track. This is an area of small communities and townlands linked by narrow, winding roads that follow the geography of the hills and valleys; the views are breathtaking.

The Sperrin mountains – which run from the north Derry coast into Tyrone and the western shores of Lough Neagh – are designated an Area of Outstanding Natural Beauty. Features such as the Black Bog and the Owenkillew river are protected as Areas of Special Scientific Interest and Special Areas of Conservation. The Black Bog is the largest area of uncut lowland raised bog in the North, while the Owenkillew river is home to Northern Ireland’s largest population of rare freshwater pearl mussels, as well as otter and salmon.

“We’re concerned about damage to the land, to the air and to the water,” says another protester, Fidelma O’Kane. “Ultimately, it’s about the health of future generations.”

Both Beggs and Tracey are among the protesters at the so-called Greencastle People’s Office – a collection of caravans overlooking a valley high in the Sperrin mountains roughly 20km northeast of Omagh.

One of their number, Emmet McAleer, is also a local councillor. Standing as an Independent, he was elected to Fermanagh and Omagh District Council last month; he polled almost 900 first preference votes.

The camp is staffed almost 24-7 – working in shifts, local people are there from around 5.30am until midnight. The busiest time is after school, when families stop by; groups of children can be seen running around outside. The youngest protesters are babies in arms. There is also a woman who has 23 grandchildren.

Teresa McCullagh explains that she works in a school. “You want the children to have a clean environment, clean air, the air that they’re used to.

“You want them to be able to stand here in 40 years’ time and still see the same view without it being destroyed.”

Another woman, a farmer, is concerned about the impact on their produce – “nobody would buy anything from you”, she says. Kathleen Beggs is a hillwalker: “To see the beauty there is on the hills and to think it might be spoiled – it’s not worth thinking about.

“I live just across the hill from the mine, and if they build a processing plant I know we’ll see lights, noise, tractors, and the level of traffic would be terrible.”

Even the children are talking about it in school, she says; her granddaughter, Ciara McLaughlin, is 10. “The gold mine is very bad, and I don’t want it here,” she adds.

Dalradian’s office is in the village of Gortin, roughly 12km from Greencastle. On the drive out to the mine, the placards multiply as it nears; among them "Mine your own home, not ours" and "Dalradian out of Ireland".

Dalradian’s community relations manager, Peter McKenna, describes himself as “as local as they come”. “I was born looking across the field from where the seams [of gold] are.”

He points out the homes of people who either work for, or who have supported the mine. “I would be extremely confident that the majority of people in Gortin and Greencastle are in support of the mine, but those who support it tend to stay quiet.”

The entrance to the mine is known as “the portal”. A large tunnel set into the hillside, it is sealed with a metal gate. Though commonly referred to as a mine, it is in fact a series of exploratory tunnels. The vein of gold hangs vertically in the rock, with the grade of the gold deposits marked on the walls; it increases the further in we go.

Above our heads, the rock is marked with spray paint; even here, relatively near the surface, the seam is a metre wide. In the glow of our head torches, the gold sparkles.

Dalradian estimates the value of the gold at about £6 billion (€6.7 billion); it is, it says, one of the world’s top undeveloped gold deposits by grade.

The company also holds prospecting licences elsewhere in Tyrone, as well as Derry and Donegal; protest groups have sprung up in some of these areas too.

The company argues that the gold is an “opportunity” that will create 350 “direct” jobs with an average salary of £40,000, as well as fostering other indirect employment in the area. Up to 60 people are currently employed there.

It cites the £115 million invested in the area by Dalradian since 2009, as well as the estimated £750 million “supply chain spend” over the mine’s lifespan (which it puts at 20-25 years), and the so-called Tyrone Fund, which it has set up and which it says has so far supported 320 local groups, including a range of community, cultural and sporting organisations, with funding worth a total of £525,000.

Among the protesters, the view is very different. “We don’t want what Dalradian are offering here,” says Fidelma O’Kane.

They dispute the need for, and benefit of, those jobs. “What’s the cost of those jobs?” asks Sean Tracey. “They even state themselves that the lifespan of the mine is between 20-25 years, so best-case scenario you get those jobs for that length of time but it’s destroying the environment and leaving the consequences of the mine behind it for ever.”

Dalradian refutes this. “Once the working life of the mine is over, the site will be rehabilitated and the land reclaimed in a way that is in keeping with the landscape and the characteristics of the local area.”

Perhaps inevitably, there is little the campaigners and the company agree on.

Among the greatest fears of those who oppose the mine is the use of a cyanide solution in the gold-extraction process and the risk of contamination of the water supply with cyanide and/or heavy metals. They are concerned about potential damage to the environment and the visual impact of waste rock, which will be stored in a pile “17 storeys high”, the protesters say, outside the proposed mine.

“It is not going to break the skyline,” says McKenna. He stresses that Dalradian must meet regulatory standards: “We didn’t rush into this, we’re here 10 years, and we have tested the feasibility of the project and the environmental conditions. We were able to start with the standard and create the design that way, for example in regard to water treatment.”

Dalradian is, he says, “completely confident that anything we discharge back into the environment will be at safe and proper levels.”

“Cyanide has a tabloid ring to it,” says McKenna. “The processes that are developed to neutralise the cyanide after we’ve finished with it mean that it’s a situation where you know about the risk beforehand and you manage it.

“Our own workers and our own workers’ families will be part of the community, will be working up there on the site, and we’re confident we can manage it.”

So far, more than 18,000 people have responded to the planning application; more than 15,000 of those are objections.

A decision is expected this year; the likelihood, McKenna says, it that a recommendation will be made for the proposal to go to a public inquiry.

“We would look forward to a public inquiry as a forum where people can bring their concerns and have them heard in a completely neutral environment.”

“It’s the future generations we’re doing this for,” says McAleer. “None of us are going to be here for ever, but we want to leave the place in decent shape for the ones that are coming after us.”