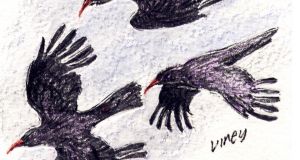 If the Wild Atlantic Way was ever in need of a visual symbol, it would surely be the chough, the crow of joyful aerial gangs, buoyed up in the bounce of wind from the cliffs and yelping exuberantly from their bright red bills.

A tourism promoter’s gift of a bird, with an added frisson of rarity, Ireland’s 2,400 choughs compare most happily with the bird’s severe decline on the coasts of western Europe. This also involves the Irish birds’ nearest relatives on the Inner Hebridean islands of Islay and Colonsay. Their dwindling colonies are now the last to breed in Scotland and at risk of disappearing altogether, as many chicks fail to survive their first year.

Choughs are birds of close-cropped coastal pastures grazed by sheep and cattle. Although feeding mainly in soil, probing the turf for insect grubs, Pyrrhocorax pyrrhocorax is one of the few species that will also dig into cowpats and sheep droppings to feed on the insects associated with them, mostly the grubs of flies and beetles.

Some 20 years ago, researchers in Ireland and other cattle countries such as Argentina and the Netherlands explored concern about the veterinary chemical Ivermectin, routinely administered to cattle and sheep to rid them of internal parasites. Carried through and dropped in dung, it was found to continue its toxic action against insects.

While adult dung beetles were largely unaffected, the larvae from their eggs could suffer “sub-lethal” damage, reducing the next generation and thus, in Ireland and Scotland, the food available for choughs. The farmers of Islay stopped using Ivermectin. It is also banned in the conservation farm plans, with their associated grants, operated by the National Parks and Wildlife Service (NPWS) in several chough habitats on the west coast.

Ivermectin, however, is just one of the veterinary drugs used on livestock that potentially kill or damage insects in their dung. New field-scale experiments on Islay, conducted by scientists for the Royal Society for the Protection of Birds on cowpats from Highland cattle, tested the impact of some commonly used pharmaceutical treatments, including those for liver fluke and ticks.

An unexpected finding in their report was that two of the treatments resulted in especially heavy reductions of fly larvae – notably the grubs of golden-winged dung flies that hover over any fresh cowpat. The flies themselves are food for swallows, and not only choughs but starlings and breeding waders dig for their grubs.

So, new insect casualties arise from cattle doses and pour-ons hitherto untested in the field. Livestock parasites are showing increasing resistance to drugs, notably in Ireland’s sheep, so their use is often redoubled. And climate warming is also expected to increase the numbers of livestock parasites. Much of the insect world, away from human notice, is a secret battleground.

Back in Ireland’s chough country, and far from intensive livestock farming, one of the 800 ventures of the NPWS farm plan scheme offers a specially happy outcome. It’s offered as “A special mix” on the website of the National Rural Network (nationalruralnetwork.ie).

Its colourful mosaic offers a bed of early nettles as cover for nesting corncrakes and an open sward sown for them and other wildlife: flowering yellow rattle, red clover and kale for bees, and seeding cereals for winter birds.

The response has been swift, notably of increasingly rare and threatened species. A flock of twite arrived to feed in 2017 and six calling corncrake in 2018. The summer air is alive with soaring skylarks and a pair of choughs, far from the nearest cliffs, have been prospecting a nest box in a derelict building.

Feargal Ó Cuinneagáin commutes to the Mullet from his work as a vet in Dublin. His transformation of the Mayo land has earned him nomination for this year’s award in the “Farming for Nature” competition sponsored by Bord Bia’s Origin Green.

His nomination will be judged, however, against 38 others made by a panel of “heritage” specialists. Listed at the farmingfornature.ie website, they offer evocative photographs and stories from farms across the country, ranging from successful mixed farming to small acreages of “high natural value” landscape.

They involve a wide cross-section of rural life, from farm families to groups with sheep on commonage. Common to them all is an enlivening enthusiasm for wildlife and the possibilities offered by every corner and character of their landscape.